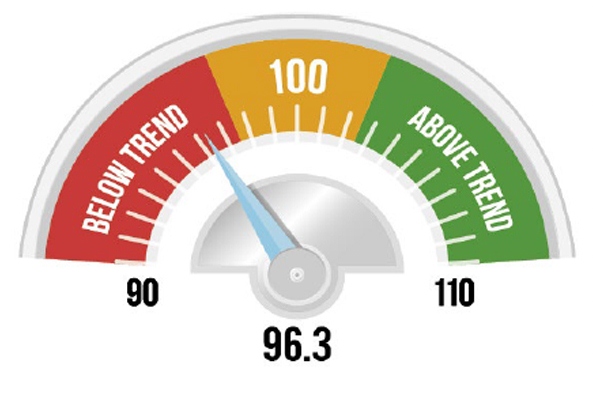 World trade has weakened going into the first quarter of 2019, and the simultaneous decline of several trade-related indicators could lead to a sharper slowdown if current trade tensions continue, according to the World Trade Organization’s (WTO) latest World Trade Outlook Indicator (WTOI).

Released on February 19, the most recent WTOI shows a reading of 96.3, the weakest since March 2010 and below the baseline value of 100 for the index, “signalling below-trend trade expansion into the first quarter.”

Weakness in the overall index was driven by steep declines in the component indices, which appear to be under pressure from heightened trade tensions. Indices for export orders (95.3), international air freight (96.8), automobile production and sales (92.5), electronic components (88.7) and agricultural raw materials (94.3) have shown the strongest deviations from trend, approaching or surpassing previous lows since the financial crisis.

Temporary factors may have influenced some of the indices, said WTO. Front-loading of imports ahead of anticipated U.S.-China tariffs may have sustained container shipping to some extent, while technical problems in the German automotive sector may have contributed to weakness in automobile production and sales. It should be noted that below-trend growth in an index does not necessarily imply a decline in the underlying data.

“This sustained loss of momentum highlights the urgency of reducing trade tensions, which together with continued political risks and financial volatility could foreshadow a broader economic downturn,” said WTO.

The WTO downgraded its trade forecast last September amid escalating trade disputes and tighter credit market conditions. Trade growth is currently forecast to slow to 3.7% in 2019 from an expected 3.9% in 2018, but these estimates could be revised downward if trade conditions continue to deteriorate.

“Nevertheless, greater certainty and improvement in the policy environment could bring about a swift rebound in trade growth,” said WTO.

Designed to provide “real time” information on the trajectory of world trade relative to recent trends, the WTOI is not intended as a short-term forecast, although it does indicate trade growth in the near future. Readings of 100 indicate growth in line with medium-term trends; readings greater than 100 suggest above-trend growth, while those below 100 indicate below trend growth.