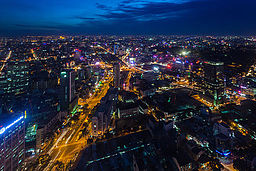 Growth in developing East Asia and Pacific is expected to remain resilient over the next three years, but the region still faces significant risks brought about by financial and fiscal vulnerabilities, according to a new World Bank report.

The newly released East Asia and Pacific Economic Update expects China to continue its gradual transition to slower, but more sustainable, growth, from 6.7% this year to 6.5% in 2017 and 6.3% in 2018.

The biannual review of the region’s economies foresees the healthy domestic demand across much of the region to continue bolstering growth amidst a challenging global backdrop, including sluggish growth in advanced economies, subdued prospects in most developing economies, and stagnant global trade.

“The long-term challenge is to sustain growth and make it more inclusive, including by shrinking gaps in income and access to public services, especially in China; improving infrastructure across the rest of the region; reducing persistent child malnutrition; and harnessing the potential of technology to stimulate financial inclusion.”

In China, growth will moderate as the economy continues to rebalance toward consumption, services and higher-value-added activities, and as excess industrial capacity is reduced. Nevertheless, tighter labor markets will support continued growth in incomes and private consumption.

Among other large economies, prospects are strongest in the Philippines, where growth is expected to accelerate to 6.4% this year, and Vietnam, where growth this year will be dented by the severe drought, but will recover to 6.3% in 2017.

In Indonesia, growth will increase steadily, from 4.8% in 2015 to 5.5% in 2018, the report says, contingent on a pickup in public investment and the success of efforts to improve the investment climate and increase revenues. In Malaysia, however, growth will fall, to 4.2% in 2016 from 5% last year, because of weak global demand for oil and manufactured exports.

Among the smaller economies, the growth outlook has deteriorated markedly in some commodity exporters. In Mongolia, the economy is projected to grow only 0.1%, down from 2.3% in 2015, on weakening mineral exports and efforts to control debt. Papua New Guinea will see its economic growth at 2.4% in 2016, down from 6.8% in 2015, because of declining prices and output for copper and liquefied natural gas. By contrast, growth will remain buoyant in Cambodia, Lao PDR, and Myanmar.

“Despite the favorable prospects, the region’s growth is subject to significant risks. A sharp global financial tightening, a further slowdown in world growth or a faster-than-anticipated slowdown in China would test East Asia’s resilience,” said Sudhir Shetty, chief economist of the World Bank’s East Asia and Pacific Region. “These uncertainties make it critical for policymakers to reduce financial and fiscal imbalances that have built up in recent years.”

The report likewise urges policymakers to address widespread malnutrition. High levels of childhood undernutrition persist in many countries, even relatively affluent ones, and lead to health and cognitive deficits that are difficult to reverse. The report recommends coordinated measures across a range of areas, including early childhood development programs and micronutrient interventions.

Finally, the report recommends that countries harness the potential of technology in transforming financial services and increasing financial inclusion. The region is technologically advanced, with a high level of mobile phone penetration, but lags in access to financial services. To reap the gains from financial innovation, countries will need to strengthen legal and regulatory frameworks and enhance consumer protection.