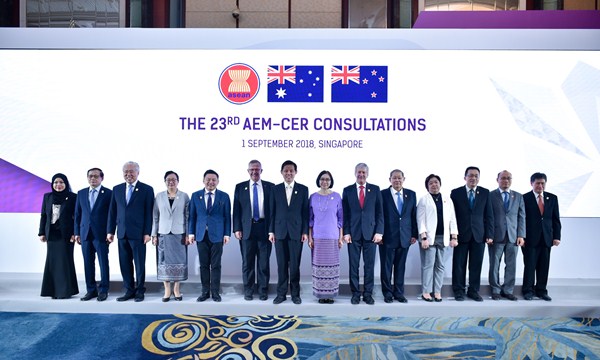 Economic ministers from the 10 Association of Southeast Asian Nations (ASEAN) member states and those from Australia and New Zealand have agreed to upgrade the ASEAN-Australia-New Zealand Free Trade Area (AANZFTA) agreement so it stays relevant, especially in light of Regional Comprehensive Economic Partnership (RCEP) negotiations.

In a meeting September 1, 2018 in Singapore for the Twenty-Third ASEAN Economic Ministers-Closer Economic Relations (AEM-CER) Consultations, the ministers in a joint statement endorsed recommendations to upgrade the agreement, including in the areas of rules of origin, customs procedures (to include trade facilitation), services, investment, e-commerce, competition (to include consumer protection), and government procurement. They also endorsed a recommendation on trade and sustainable development.

Moreover, they tasked officials to start implementing the recommendations in the first half of 2019 with a view to concluding the text to amend AANZFTA “within an expeditious timeframe.”

The AANZFTA FTA Joint Committee (FJC) was instructed to devise a work plan that takes into account progress in other negotiations in determining the schedule of meetings to implement these recommendations.

“The outcomes should ensure the Agreement retains its relevance to business and adds value to developments in other fora including the Regional Comprehensive Economic Partnership (RCEP) negotiations,” said the statement.

The ministers likewise recognized the importance of swiftly concluding the RCEP negotiations in contributing to open and inclusive regional economic integration. To this end, the ministers reaffirmed their commitment to work together to achieve a modern, comprehensive, high quality, and mutually beneficial RCEP.

The ministers welcomed the work done to stock-take non-tariff measures (NTM) and tasked officials to finalize the NTM work plan. The ministers also reiterated the importance of monitoring the utilization of AANZFTA tariff preferences and having such data available to generate quantitative evidence on the benefits of AANZFTA, and to facilitate identification of specific sectors or issues where follow-up might be needed to improve FTA utilization.

The ministers also welcomed the AANZFTA Business Engagement Strategy (2018-2023), focused on raising business awareness of AANZFTA, business-to-government dialogue, and engagement in economic cooperation and collaboration among businesses. The ministers also welcomed the development of a stakeholder engagement strategy, focused on raising awareness of AANZFTA and creating opportunities for dialogue with relevant stakeholders.

ASEAN ministers expressed appreciation for Australia and New Zealand’s commitment to provide ongoing funding for economic cooperation under AANZFTA beyond 2019.