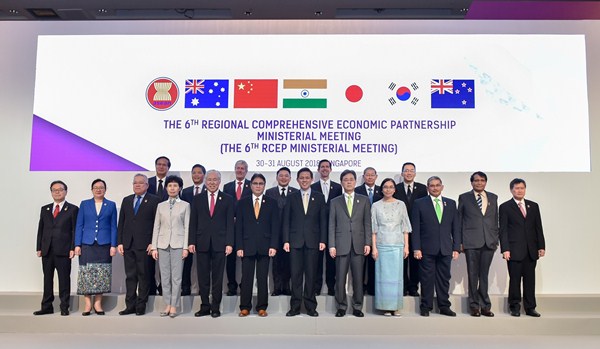 Ministers from the 16 Regional Comprehensive Economic Partnership (RCEP) participating countries adopted on August 31 a package of deliverables to be reached by the end of the year, as the countries target concluding talks on creating the world’s largest free trade area before the year is over.

In a joint statement, the ministers announced the adoption of the package of deliverables developed by the trade negotiating committee, and welcomed the plans to achieve the targets set out in the package.

The ministers made the announcement at the end of the 6th RCEP Ministerial Meeting held on August 30-31, 2018 in Singapore. In addition to assessing the developments since the 5th RCEP Intersessional Ministerial Meeting on July 1, 2018 in Tokyo, Japan, including the outcomes of the 23rd round of negotiations held on July 17-27, 2018 in Bangkok, Thailand, the ministers also provided guidance on specific issues elevated by the negotiators and exchanged views on the next steps toward the conclusion of negotiations.

The ministers also tasked negotiators to “exert utmost efforts to achieve each of the targets in the Package by the end of this year,” expressing the hope that completion of the package “would signify the substantial conclusion of the RCEP negotiations this year.”

The ministers likewise welcomed the conclusion of two additional chapters at the 23rd round of negotiations, namely, the chapters on customs procedures and trade facilitation and on government procurement, bringing the total concluded chapters to date to four. The ministers noted the good traction made in the negotiations of other chapters, with some now nearing conclusion.

The lingering disagreement among negotiators has stemmed from the difference in development levels among the 16 countries. This has proved a major obstacle since the negotiations began in 2013, as Japan and other advanced economies seek a high level of trade liberalization, while the emerging markets in the group demand protections for less competitive domestic industries.

The ministers said they look forward to the next update from the negotiators before year-end. They agreed to “keep the lines of communication open and stand ready to provide prompt guidance and support to the negotiations, including through intensified domestic consultations, so as to achieve the targets set out in the package.”

They also underscored the significance of establishing RCEP amidst escalating trade frictions, and took it as a collective responsibility to uphold a global trade environment that is open, rules-based, and inclusive.

“To this end, the Ministers reaffirmed the commitment to see RCEP through its conclusion and achieve a comprehensive, high-quality and mutually beneficial economic partnership agreement, notwithstanding rising uncertainties in the global trade environment,” said the statement.

Another working-level meeting is scheduled for October, followed by further ministerial talks. If progress is made, a summit could be held as soon as November to conclude an agreement in principle.