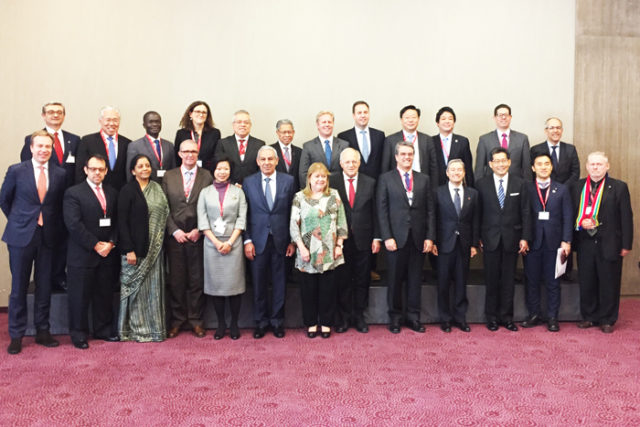 Attending the World Economic Forum in Davos, World Trade Organization Director-General Roberto Azevêdo welcomed the strong desire shown by ministers and the private sector for new negotiated outcomes to be delivered at the WTO’s Ministerial Conference in Buenos Aires in December this year. Responding to concerns about a potential rise in protectionism, the Director-General urged WTO members to show leadership and caution.

The Director-General took part in World Economic Forum sessions on global trade and investment, digital trade and protectionism, and held a series of meetings with leaders from business, labour and government. He also attended an informal ministerial gathering on WTO issues hosted by the Swiss government on 20 January. The meeting was attended by ministers from a wide range of WTO members, including Benin and Morocco, as coordinators of the WTO Least-developed Countries Group and the WTO Africa Group, respectively.

Speaking after the ministerial gathering, the Director-General said: “2017 is an important year for the WTO as we prepare for our Ministerial Conference in Buenos Aires in December. So it’s very welcome that we are actually starting the year with some positive news. The WTO’s Trade Facilitation Agreement is on the verge of entry into force. I received the 107th ratification today, from Nigeria. Just 3 more required for the Agreement to enter into force. This shows that members are delivering on their commitments and it means that we will be able to start delivering the benefits of the Agreement.

“Members want to build on the negotiating successes that we have built up over recent years. They want to see concrete results in Buenos Aires, and this is very welcome. A wide range of areas are now being discussed. Ideas and proposals are being put forward. Engagement is high — both from WTO members and from the private sector. We’ve seen that again here in Davos this week. But if we are to advance, we need to intensify this work. I will be facilitating discussions among members to move things forward — starting as soon as I get back to Geneva.

“Clearly trade is very high on the political agenda at the moment. I recognize the concerns about globalization — and the need to respond. The net positive effect of trade means nothing if you’ve lost your job. So we need better domestic policies to support people and get them back to work. But attacking trade won’t help here. I have heard a lot of talk about protectionism and trade wars this week. That would destroy jobs, not create them. I am urging everyone to show caution and leadership. We must avoid talking ourselves into a crisis.

“Of course there is a lot of uncertainty ahead of us. But my message is: don’t be paralyzed by that uncertainty. Instead we need to work even harder. Ministers agreed today to increase their engagement throughout 2017. This will be essential to keep strengthening and improving the trading system.”

The informal ministerial gathering was chaired by Swiss Federal Councillor Schneider-Ammann. His summary of the meeting is available here, and the list of attendees is available here. – WTO