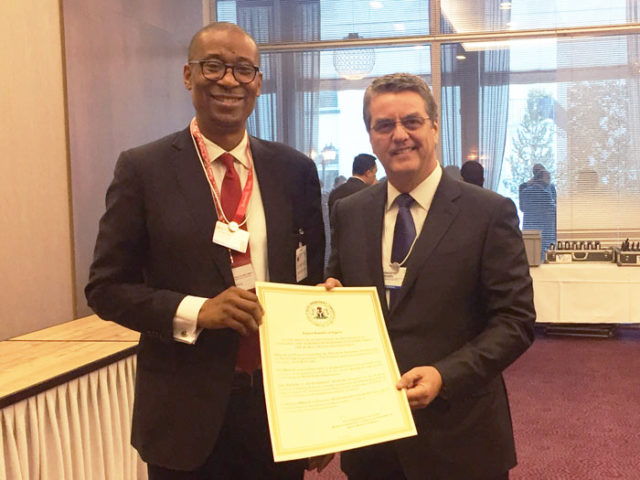 Nigeria has ratified the Trade Facilitation Agreement (TFA), making it the 107th World Trade Organization member to do so. Only three more ratifications from members are needed to bring the TFA into force.

Nigeria’s instrument of acceptance was submitted to the WTO this week. Nigeria’s Minister for Industry, Trade and Investment Okechukwu Enelamah met with Director-General Roberto Azevêdo in Davos to mark the handover of the document.“Nigeria’s ratification of the Trade Facilitation Agreement is a reflection of our commitment to the WTO and a rules-based economy. It is evidence of President Muhammadu Buhari’s commitment to rapidly implement his presidential initiative on the creation of an enabling environment for business,” Mr. Enelamah said.

“Nigeria would like to see a strengthened WTO that reflects the development principles of developing countries like Nigeria and we praise the effectiveness of DG Azevêdo in this regard,” Mr. Enelamah said.

Earlier, on 10 November 2014, Nigeria submitted its Category A notification to the WTO outlining which substantive provisions of the TFA it intends to implement upon entry into force of the Agreement. The TFA will enter into force once two-thirds of the WTO membership has formally accepted the Agreement.

The TFA broke new ground for developing and least-developed countries in the way it will be implemented. For the first time in WTO history, the requirement to implement the Agreement was directly linked to the capacity of the country to do so. In addition, the Agreement states that assistance and support should be provided to help them achieve that capacity.