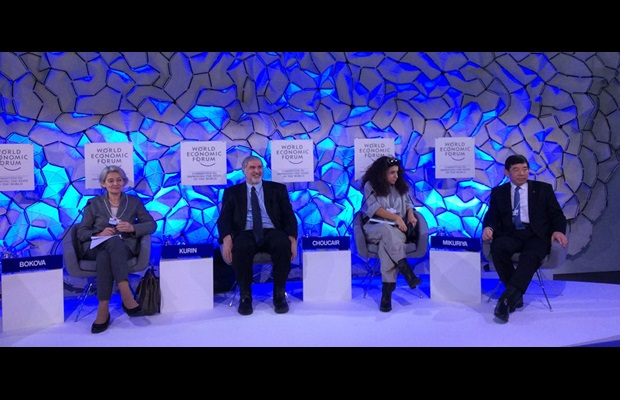 World Customs Organization Secretary General Dr. Kunio Mikuriya highlighted the work undertaken by the WCO and its partners, including the development of a specialized curriculum on cultural heritage for Customs officers and of a dedicated communication platform named ARCHEO, at a special panel debate on Cultural Leadership in Davos on January 18, 2017, in the context of the World Economic Forum’s 47th Annual Meeting.

A small alpine resort, Davos-Klosters, with the population of around 1,000 people has hosted one of the most prestigious events – World Economic Forum’s 47th Annual Meeting from 17 to 20 January 2017. More than 3,000 delegates from around 90 countries, including 50 Heads of States and more than 500 journalists attended this flagship event.

The themes that were discussed at this year’s Forum revolved around the Fourth Industrial Revolution and the way technologies affect social, economic and political developments; the dark side of globalization; the rise of populism and protectionism. The future of Europe, in view of Brexit and the US Presidency of Donald Trump were widely discussed within the scope of the changes these events will eventually bring to the global landscape.

WCO’s Dr. Mikuriya was invited to participate in a special panel debate in Davos on Safe Havens for Heritage in Wartime: Cultural Leadership in a Dangerous World. He was joined at the panel by other distinguished speakers: UNESCO Director General, Irina Bokova; Acting Provost and Undersecretary for Museums and Research at the Smithsonian Institution, Richard Kurin; and a Clown and Storyteller from Clown-Me-In, Lebanon, Sabine Choucair. The debate was moderated by Hadley Gamble, a CNBC reporter and anchor.

The objective of the session was to discuss the challenges involved in dealing with cultural heritage under threat. Dr Mikuriya gave an insight on the role Customs authorities play in the prevention of illicit trafficking of cultural objects and their subsequent restitution. He also highlighted an urge for partnerships and provided an example of excellent partnership between the WCO, UNESCO, INTERPOL, UNODC and ICOM (International Council of Museums) in the area of prevention of illicit trafficking as well as with the Smithsonian in the development of a specialized curriculum for Customs officers in this domain, which will be deployed later this year. He pointed out that the dimensions of the problem being too large, a common effort is needed to protect cultural heritage.

Dr. Mikuriya also participated in a number of private bilateral meetings with political, business and opinion leaders to discuss the global trade agenda and its vulnerabilities, as well as the role Customs can play in tackling these challenges in an efficient manner. – WCO