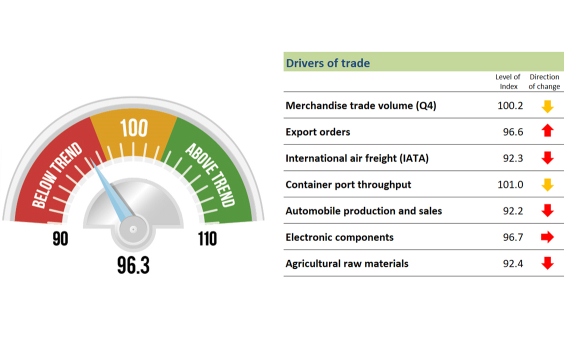 World trade growth is likely to remain weak into the second quarter of 2019, as shown by the latest World Trade Outlook Indicator (WTOI) reading released May 20 by the World Trade Organization (WTO).

The latest WTOI reading is 96.3, exactly as it was in the previous release in February this year, maintaining the weakest level since 2010, said WTO in a statement.

The latest WTOI remains well below the baseline value of 100 for the index, signalling continued falling trade growth in the first half of 2019.

“It should be noted that the WTOI does not reflect some major trade measures announced in recent days. The outlook for trade could worsen further if heightened trade tensions are not resolved or if macroeconomic policy fails to adjust to changing circumstances,” the WTO said.

The latest result of the WTOI was driven by declines in all but two component indices.

The index for container port throughput (101.0) also declined but remained above 100, suggesting growth in line with recent trends.

Indices for export orders (96.6) and electronic components (96.7) appear to have bottomed out, even as both remained firmly below trend.

“As stated above, there are significant downside risks to the 2019 forecast. Any rebound in 2020 would depend on reduced trade tensions and/or improved macroeconomic performance,” said WTO.

Designed to provide “real time” information on the trajectory of world trade relative to recent trends, the WTOI is not intended as a short-term forecast, although it does provide an indication of trade growth in the near future. It aims to identify turning points and gauge momentum in global trade growth.

Readings of 100 indicate growth in line with medium-term trends; readings greater than 100 suggest above-trend growth, while those below 100 indicate below trend growth.