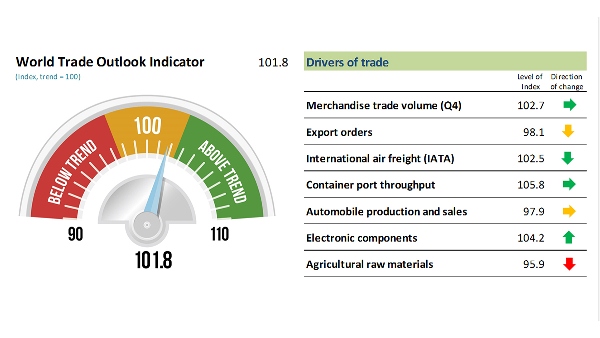 The strong rate of trade expansion is likely to continue, while slowing slightly in the second quarter of 2018, according to the World Trade Organization’s (WTO) latest World Trade Outlook Indicator (WTOI) released on May 17.

“The WTOI’s current value of 101.8 remains above the baseline value of 100 for the index but below the previous value of 102.3, which suggests continued solid trade growth in the second quarter of 2018 but probably at a somewhat slower pace than in the first quarter,” WTO said in a release.

The recent dip in the WTOI reflects declines in component indices for export orders in particular, but also for air freight, which may be linked to rising economic uncertainty due to increased trade tensions.

The latest results are broadly in line with the WTO’s most recent trade forecast issued on April 12, 2018, which predicted a moderation of merchandise trade volume growth from 4.7% in 2017 to 4.4% in 2018. Risks to the trade forecast posed by rising trade tensions remain present, WTO said.

The moderate dip in the overall WTOI index was driven by declines in component indices for export orders and air freight.

The forward-looking export orders index dropped sharply, falling from an above-trend plateau to a below-trend value (98.1) in the latest month.

In contrast to the mixed results elsewhere, the index for electronic components trade (104.2) has turned up, climbing above trend.

Designed to provide “real time” information on the trajectory of world trade relative to recent trends, the WTOI is not intended as a short-term forecast, although it does provide an indication of trade growth in the near future. Its main contribution is to identify turning points and gauge momentum in global trade growth.

Readings of 100 indicate growth in line with medium-term trends; readings greater than 100 suggest above-trend growth, while those below 100 indicate the reverse. The direction of change reflects momentum compared with the previous month.