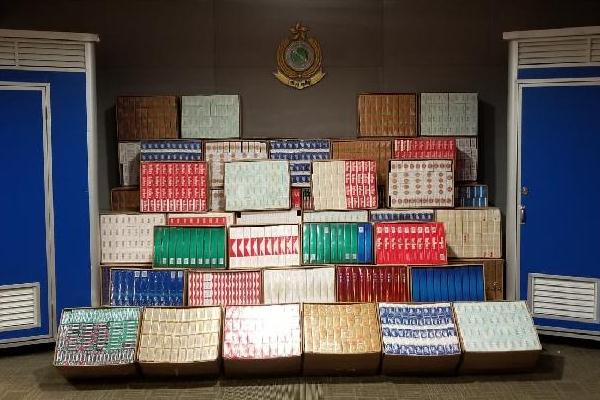 About 60% of the cases related to illicit cigarettes, followed by infringing and dangerous drug cases, according to the agency.

Six big drug cases, each valued at more than HKD10 million, were detected in 2018. About 33kg of methamphetamine and 176kg of cocaine were seized in the six cases. In one case, the biggest ever in-town cocaine seizure by the department, 79kg of the drug with a market value of about HKD80 million were intercepted.

Mainland-Hong Kong cases accounted for around 86% of the total number, a surge of 5% from 2017. The value of electrical and electronic goods seized also surged 70% in 2018 to HKD175 million. Sea smuggling seizure value increased 1.1-fold to HKD179 million.

A total of 270 cases valued at around HKD26 million were detected from the air cargo channel, representing increases of 17% and 19%, respectively.

In the interception of endangered species, meanwhile, 745 cases were detected, in which 528 people were arrested and items totaling more than 270,000kg were seized, representing increases of 72%, 1.1-fold and 3.3-fold, respectively. The value of the items seized dropped by 48%. Excluding the record ivory seizure made in 2017 in which around 7,000kg of raw ivory tusks were seized, the total seizure weight rose 3.8-fold while overall value remained at the same level.

Nineteen big cases were detected in 2018, each with a value of more than HKD5 million. While the aggregate value of these cases reached HKD246 million, commodities valued at HKD34 million and HKD22 million were seized, respectively, in two single cases.

On intellectual property rights protection, 951 infringing cases were detected and 725 arrests made, representing annual increases of 4% and 1%, respectively. Infringing items seized rose by 23% to 2 million while the seizure value was around HKD104 million, down 12% from 2017. Major seizures included clothes and accessories, pharmaceutical products, electrical and electronic goods, shoes and watches.

In 2018, the department detected 207 cases of Internet infringement. The total seizure value jumped to HKD3.5 million, a 35% increase from 2017. In particular, online piracy cases detected jumped 1.5-fold to 20 cases.

Forty-five cases of using Internet platforms by physical shops to solicit for business were detected, which was an increase of 67%. The seizure value also rose 18% from HKD1.73 million in 2017 to HKD2.05 million in 2018.

The Big Data System has been running well since its operation began in 2017. In 2018, the system detected 38 infringing cases, accounting for 20% of the Internet infringing cases. This contributed to the seizure of 3,400 counterfeit items, which constituted 61% of the seizures from Internet piracy cases.

Apart from the arrests and seizures made, one mastermind and five members of an organized counterfeiting syndicate arrested in 2016 were sentenced to 11 to 26 months’ imprisonment in 2018. During the operation, over 12,000 items of counterfeit goods with an estimated market value of over HKD5 million were seized. More than HKD1.5 million worth of crime proceeds were also confiscated.