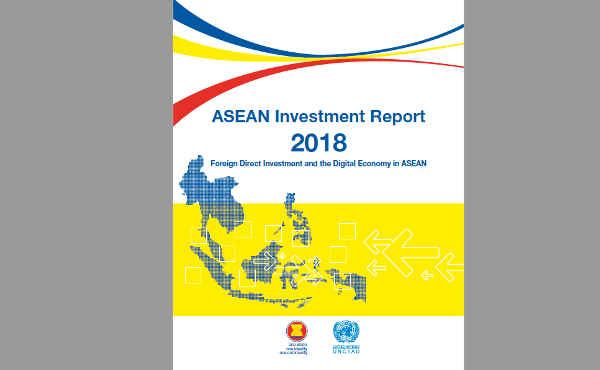 Foreign direct investment (FDI) flows to the Association of Southeast Asian Nations (ASEAN) rose from US$123 billion in 2016 to an all-time high of $137 billion in 2017, with a rise in investments in eight member states, according to the newly released ASEAN Investment Report 2018.

Combined FDI flows to the four CLMV countries (Cambodia, Laos, Myanmar, and Vietnam) reached a record level in 2017, increasing by 21% to $23 billion—accounting for 17% of total FDI flows in ASEAN.

With flows exceeding $14 billion, Vietnam was the third largest recipient within ASEAN and accounted for over 60% of flows to the CLMV countries.

In 2017, Singapore, Indonesia, and Vietnam accounted for 72% of FDI inflows to ASEAN. Singapore remained the largest recipient, accounting for 45% of total FDI in ASEAN. However, FDI flows are gradually reaching more ASEAN countries, noted the report.

“On its 50th anniversary last year, ASEAN has shown that it remains an investment destination of choice,” said the report. “FDI flows in the region reached an all-time high of US$137 billion, up by 12% from 2016.”

Intra-ASEAN investments, the biggest contributor to FDI flows in the region, rose for the second consecutive year to a new high ($27 billion), contributing 19% to total inflows. The largest source was Singapore (69%), followed by Malaysia, and Thailand. About 95% of intra-ASEAN investment last year came from these three countries.

Indonesia remained the largest recipient of intraregional investment, absorbing more than 45% of intra-ASEAN investments last year. ASEAN investments into Indonesia rose by 20% to $11.9 billion in 2017, buoyed by a 28% rise in investment from Singapore to $10.7 billion.

Singapore was the largest investor across the region, followed by Japan. An increase in investments from China, the Netherlands, Germany, Switzerland, and Australia further contributed to the higher inflows.

Wholesale and retail trade emerged as the largest industry recipient, overtaking finance and manufacturing sectors, which are traditionally the major FDI recipients.

FDI in wholesale and retail rose by 75% to $38.9 billion, led by the opening of consumer retail stores, supermarkets and malls, and by e-commerce activities. Manufacturing investment increased by 56% to $31.6 billion, while FDI in finance and banking fell to $15.6 billion from $41.4 billion in 2016.

There is also growing interest in health care, research and development activities, and e-commerce, including fintech.

“Investments in these industries tend to focus on countries with competitive ecosystems and rapidly growing industry clusters, such as in the automotive and the electronics industries,” elaborated the report.

“The digital revolution is disrupting and transforming industries and businesses as well as the way goods and services are delivered. The digital economy has also generated opportunities to accelerate development by increasing business efficiency and productivity, widening access to existing or new markets, and facilitating participation in the global value chains,” added the publication published this month.

Looking ahead, the report said investment prospects in the region are promising, citing improvements in the investment environment, strong economic growth, a growing middle class, and advancing regional integration.

“These optimistic prospects are corroborated by a number of investment and business surveys. Many MNEs from the European Union, Japan and the United States with operations in the region plan to increase investment in ASEAN,” it said.

Furthermore, foreign and ASEAN MNEs are likely to remain active in infrastructure activities, given the steady economic and industrial growth and the commitment of countries in the region to infrastructure development.

The competitiveness of the region for manufacturing and services will also continue to attract FDI flows into these industries.

In addition, emerging investment opportunities in the digital economy will push more digital firms to adopt regional strategies to benefit from network effects and scalability.

The ASEAN Investment Report was prepared by the ASEAN Secretariat and the United Nations Conference on Trade and Development.