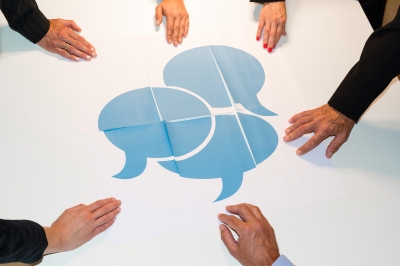 Business leaders on 3 July presented a set of recommendations on how the World Trade Organization (WTO) can help both small and large companies in developed and developing countries by tackling obstacles to business in key sectors of interest.

In May last year, as part of the WTO’s new “Trade Dialogues initiative,” business representatives from around the world called on WTO to deal with what they described as “pressing business issues”. Two focus business groups have been exchanging views in the past 13 months on how the work of the WTO can help address the current needs of business.

The group leaders – Stormy Mildner, B20 Sherpa and Head of Foreign Trade Policy at the Federation of German Industries (BDI), and John Danilovich, Secretary General of the International Chamber of Commerce (ICC), presented their recommendations to the coordinators of groups of WTO members and a number of other members.

The first business group worked around the theme of micro, small and medium-sized enterprises (MSMEs), and e-commerce and developed numerous recommendations in this area. The second business group discussed issues such as market access, services and investment facilitation, and likewise put forward a number of suggestions on how the work of the WTO work can help business overcome difficulties when they operate in these areas. In their interactions with members, a range of other issues were also discussed, including agriculture matters.

Danilovich briefed WTO members participating in those meetings on the final recommendations of the first group. The ideas discussed by the group ranged from enhancing connectivity and providing capacity-building to MSMEs to helping MSMEs sell goods online more efficiently. The group suggested work to support e-commerce growth and to improve consumer trust. The report from the Business Focus Group on E-commerce and SMEs is available here.

Dr Mildner briefed participants on final recommendations of the second group. The businesses participating in the second group called for a roll-back of protectionism and the revitalization of WTO trade negotiations. They stressed the importance of addressing the outstanding Doha issues and also called for new initiatives to advance trade in other areas, such as investment facilitation. They underlined the importance of the rapid and effective implementation of the WTO Trade Facilitation Agreement. The report from the Business Focus Group on Market Access, Services and Investment Facilitation is available here.

WTO Director General Roberto Azevêdo welcomed the business interest in the work of the WTO. He also commended the “concrete ideas” put forward by the two groups and emphasized the usefulness of listening to relevant stakeholders. He added that the real value of the work comes from the interaction with WTO members.

The business event held in May 2016 brought together over 60 business leaders to discuss the challenges and opportunities they face in conducting trade and to discuss how the WTO can help in dealing with them. Participants were from small and large enterprises from developed and developing countries, representing a wide range of sectors. The event was held at the request of the ICC and the B20 group of leading independent business associations from G20 economies, and facilitated by the WTO. It developed into a series of ongoing conversations which produced the recommendations referred to above.

This initiative is part of the WTO’s ongoing series of “Trade Dialogues” events. This series is bringing together a wide range of stakeholders, including labour organisations, consumer bodies and academics, to discuss a variety of trade-related issues.