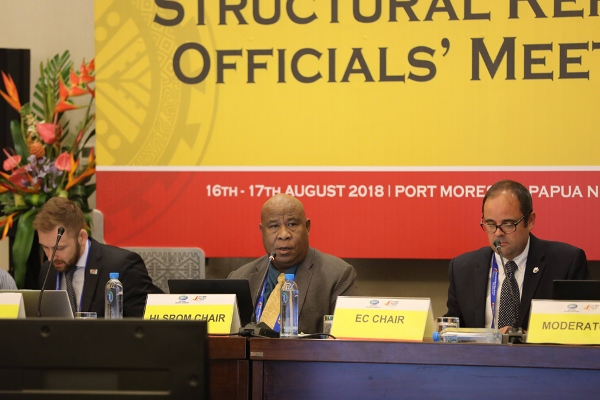 Against the backdrop of rising uncertainty, doing business in the Asia-Pacific Economic Cooperation (APEC) member economies continues to get easier, helping to open up trade and growth opportunities in the Asia-Pacific, according to a newly released report.

The “APEC’s Ease of Doing Business–Interim Assessment 2015-2017” produced by the APEC Policy Support Unit reveals a 7.3% improvement in the organization’s ease of doing business (EoDB) initiative over the last two years.

The initiative is focused on five priority areas: getting credit, starting a business, dealing with construction permits, enforcing contracts, and trading across borders.

“APEC region officials’ efforts to raise the quality of their regulations are steadily making it cheaper and more efficient to do business in the Asia-Pacific,” explained Carlos Kuriyama, a senior analyst with the APEC Policy Support Unit and report co-author.

While the greatest progress was achieved in the priority area of getting credit (18.1%), followed by starting a business (11.8%), all other areas also reported progress during the period.

“Getting credit is the area where APEC has had the biggest business environment breakthrough, driven by stronger legal rights and credit information systems,” Kuriyama noted. “The average availability of credit information in the region increased from about 74 per cent to over 77 per cent of adults.”

Other measures employed in select instances which contributed to this trend included halting the need for a company seal to register a business as well as the introduction of an e-platform to expedite business permit applications.

Progress in trading across borders was marked by a 6.5% reduction in the average time it takes businesses in APEC economies to export, from 70 to just over 65 hours. Dealing with construction permits took one less day to obtain.

“The move in the APEC region towards smarter, more modernized regulations is timely as digital development creates new avenues for businesses to engage in cross-border trade, including small and micro enterprises with limited resources,” said Kuriyama.

APEC economies are targeting a 10% improvement in the region’s business environment by the end of 2019, based on 2015 levels in the five APEC Ease of Doing Business initiative priority areas. The initiative is inspired by the World Bank’s Doing Business program.

The exchange of good regulatory practices and implementation guidance, drawing upon experiences and recommendations garnered from public-private sector engagement in APEC, is at the center of the initiative’s work.

“Collaboration across APEC economies to improve their ease of doing business has achieved good results so far,” said Kuriyama. “The area with the most room for improvement is in enforcing contracts, with gains mostly stemming from higher quality of judicial processes.”

Despite APEC getting closer to the 10% improvement target by 2018, the group still needs to intensify its efforts in all areas, since the current combined overall progress is mostly explained by two priority areas (getting credit and starting a business).

In addition, the lower progress measured by APEC’s median indicators is an indication that APEC’s progress has been explained by a few APEC economies in most of the priority areas.

“Sustained reform and capacity building activities in APEC that focus on qualitative aspects of regulation like sustainability are critical to ensuring the momentum of business development and trade in the region at this challenging juncture,” Kuriyama concluded.