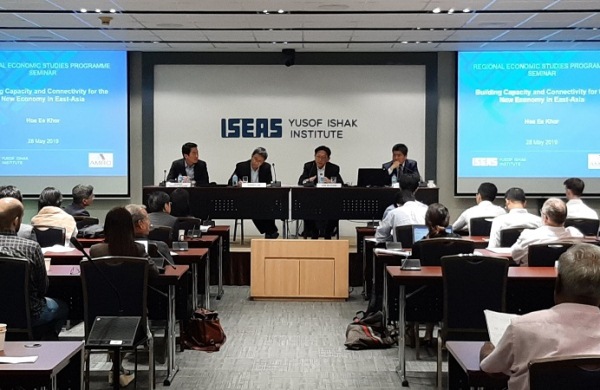 The Association of Southeast Asian Nations Plus Three (ASEAN+3) remains resilient amid the escalating U.S.-China trade tensions as the region’s dependence on extra-regional demand continues to decline, according to regional economists.

Experts said ASEAN+3 economies are in a position to mitigate economic headwinds from rising global trade tensions that have dampened the economic outlook in the region.

This encouraging outlook was bared during a seminar co-organized by the ASEAN+3 Macroeconomic Research Office (AMRO) and the Institute of Southeast Asian Studies (ISEAS)-Yusof Ishak Institute in Singapore in late May 2019.

According to the report released May 1, regional growth is expected to moderate only slightly to 5.1% this year and 5.0 in 2020 from 5.3% last year.

In the near term, the report pointed out that the risks confronting the region are mainly external, and the biggest risk is still the escalation of global trade tensions.

Khor also mapped out the risks that the region faces. He observed that open economies, which are deeply integrated within the global supply chains, like Singapore and Korea, are particularly vulnerable to global threats such as the escalating tensions on trade and technology between the United States and China and the downturn in global economic activity.

He noted that the region’s dependence on extra-regional demand has fallen sharply from 44% to 30% over the years. However, he also pointed out that Singapore, with more than 60% of its economy dependent on external demand, is likely to be more heavily affected by trade shocks.

He suggested that Singapore and other economies in the region should respond by continuing to leverage on intra-regional opportunities for growth.

Dr. Siwage Dharma Negara, a senior fellow at the Regional Economic Studies Programme of the ISEAS-Yusof Ishak Institute, suggested that the trade conflict has expanded beyond tariff measures. Siwage argued that any impact from non-tariff measures, such as a technology ban, would be difficult to evaluate.

Dr. Hak Bin Chua, senior economist at Maybank Kim Eng, echoed this point and added that there might be spillover effects from the technology war onto other East Asian economies, which are part of the electronic supply chain.

On trade diversion effects, Chua pointed out that although more companies are shifting production into ASEAN countries, not all countries benefit equally from this reconfiguration of the global supply chain. Negara agreed, noting that countries with more open economies and better regulatory frameworks invite more foreign direct investment.

Talking about the longer term prospects for the region, Khor pointed out that technological advances have resulted in automation, and demographic changes have given rise to greater demand for higher quality goods and services.

The region, therefore, has to embrace the “new economy” to create quality jobs and satisfy the new demand. To create a favorable ecology for the “new economy,” regional economies need to invest in both hard and soft infrastructure.

The panel agreed that there are opportunities that the region could tap to enhance capacity building and connectivity, including strengthening regional financial safety nets and leveraging on regional investments and savings. Economies in the region can tap programs like the Belt and Road Initiative, as well as the Master Plan on ASEAN Connectivity 2025, to propel connectivity projects.