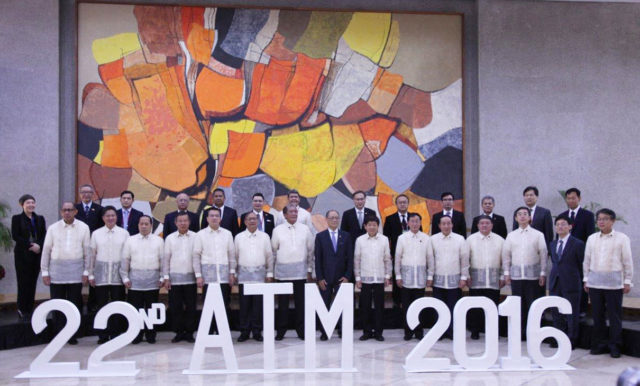 Transport ministers of the Association of Southeast Asian Nations (ASEAN) have adopted, endorsed, and reaffirmed several initiatives and policies intended to further deepen integration within the region and promote seamless people-to-people and goods connectivity.

These actions were taken at the conclusion of the 22nd ASEAN Transport Ministers (ATM) Meeting held in the Philippines recently.

In a joint statement, the transport ministers commended the strong start in implementing the Kuala Lumpur Transport Strategic Plan (KLTSP) 2016-2025 and reaffirmed commitments to intensify cooperation toward the ASEAN Economic Community 2025 vision.

They also endorsed the work plans of all sectorial working groups under the Senior Transport Officials Meeting for 2016-2017, which guides the working groups in setting priorities and deliverables for the next two years.

For maritime, the ministers adopted the Framework of Cooperation on Certification of Competency for Near Coastal Voyages (NCV) issued by ASEAN member-states as a mechanism to address disparities in trading limits and syllabus requirements on NCV certificates. The framework will focus on capacity building and information sharing among ASEAN countries.

The ministers have tasked senior officials and relevant working groups to come up with further plans to strengthen the framework of cooperation towards ASEAN-wide recognition of NCV certification.

For aviation, the ministers applauded the full ratification by all ASEAN member-states of air transport agreements that will pave the way for the Open Skies policy, one of the key support pillars for ASEAN integration.

They were also pleased with the progress in establishing the Mutual Recognition Arrangement (MRA) on Flight Crew Licensing, which will demonstrate ASEAN’s commitment to raise aviation safety standards. Senior officials were tasked to finalize the MRA for adoption and signing at the 23rd ASEAN Transport Ministers Meeting in 2017.

Two masterplans—the ASEAN Air Traffic Management Harmonization Master Plan, which was developed to achieve a seamless ASEAN Sky, and the negotiation of the 10th package of commitments on Air Transport Services under the ASEAN Framework Agreement on Services—are both targeted for completion by 2017.

Transport ministers also agreed to sign soon the negotiations on the ASEAN Framework Agreement on the Facilitation of Cross-Border Transport of Passengers by Road Vehicles (ASEAN CBTP). The CBTP will hasten seamless cross-border mobility and enhance regional people-to-people connectivity.

The ministers also noted the ongoing preparations for the pilot project on ASEAN Customs Transit System (ACTS), including completion of the Operating Guidelines for Goods Vehicle Cross-Border Permit and the ACTS Manuals for Transport Officials and for Principals and Transporters.

To enhance the application of intelligent transport systems (ITS) in the region, the ministers adopted the ASEAN ITS Policy Framework 2.0 which sets out the guiding principles for ASEAN member-states to identify, plan, evaluate, and facilitate ITS applications in their countries, taking advantage of the many potential benefits of ITS. The completion of the ASEAN ITS Policy Framework 2.0 marks a significant milestone in regional efforts to maximize road network efficiency as well as improve traffic flow.

To promote road safety, the ministers adopted and launched the ASEAN Road Safety Booklet as a tool for disseminating key highlights of the ASEAN regional safety strategy to enhance public awareness of road safety in the region.

The ministers also welcomed the progress made to cooperate on transportation projects with other countries such as China, South Korea, Japan, European Union, and the United States, including adoption of the revised ASEAN-China Transport Cooperation Strategic Plan and the Development Strategy for ASEAN-China Transport Scientific and Technological Cooperation.

In a press conference at the culmination of the meetings, Department of Transportation Undersecretary Felipe Juan said “we aim to enhance trade, attract investments, facilitate movement of goods and people, and boost tourism.”

“With aggressive transportation infrastructure and sustainable transport policies, we hope to ultimately provide a better and higher quality of life to our people,” he added.

The 23rd ATM meeting will take place in Singapore in 2017. – Roumina Pablo