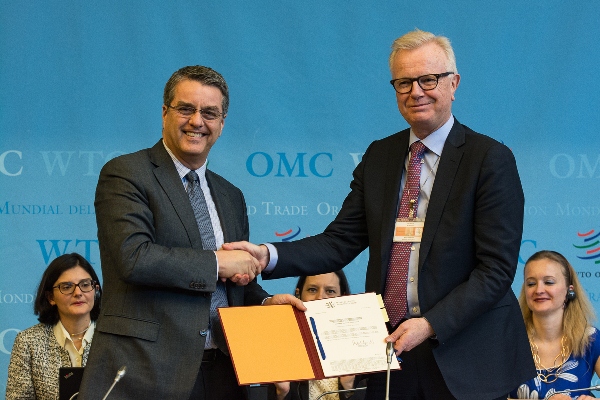 Following the entry into force of the World Trade Organization’s Trade Facilitation Agreement (TFA), WTO members pledged to advance work on implementing the agreement so its full benefits can be reaped.

The members hailed the entry into force of the TFA as a historic achievement at a meeting of the General Council on February 27. The TFA, the first multilateral deal concluded in the 21-year history of the WTO, entered into force on February 22 after two-thirds of WTO’s 164 members gave the needed acceptance for the agreement to take effect.

The TFA seeks to speed up the movement, release, and clearance of goods across borders and creates a significant boost for the multilateral trading system.

In his address to WTO members, director-general Roberto Azevêdo said: “By ratifying the agreement, members have shown their commitment to the multilateral trading system. You have followed through on the promises made when this deal was struck in Bali. And by bringing the deal into force we can now begin the work of turning its benefits into reality.”

Azevêdo, as depositary of WTO agreements and their amendments, signed the official depositary notification of the TFA’s entry into force and handed over the notification to General Council Chair Ambassador Harald Neple (Norway) at the meeting.

“The Agreement on Trade Facilitation is a defining multilateral achievement of our time,” Ambassador Neple said. “It is practical, modern and global and it symbolizes the essence of the WTO: members from all corners of the globe coming together, overcoming differences and responding to pressing trade issues for the benefit of all,” he said.

The chair called on members who have not yet ratified the TFA to do so soon and to deposit their instruments of acceptance. All members, the chair added, must work together to fully implement the agreement.

All delegations taking the floor at the meeting—representing developed, developing and least-developed countries (LDCs)—welcomed the TFA’s entry into force.

Cambodia, speaking for the LDC group, said the milestone marked a very important start to members’ work to achieve results in trade facilitation. Cambodia, along with several other delegations, emphasized the need of developing countries and LDCs for implementation assistance.

The agreement is unique in that it allows developing and least-developed countries to set their own timetables for implementing the TFA depending on their capacities to do so—and it provides for support to help them develop their capacity.

Full implementation of the TFA is forecast to slash members’ trade costs by an average of 14.3%, with developing countries having the most to gain, according to a 2015 study carried out by WTO economists.

The TFA is also likely to reduce the time needed to import goods by over a day and a half and to export goods by almost two days, representing a reduction of 47% and 91%, respectively, over the current average.