The WCO chief was invited by Kyaw Htin, Director General of Myanmar Customs.

In Nay Pyi Taw, Myanmar’s country’s capital city, Secretary General Mikuriya had a series of meetings with political leaders, including Major General Aung Soe, Deputy Minister for Home Affairs, Thant Sin Maung, Minister for Transport and Communication, and U Maung Maung Win, Deputy Minister for Planning and Finance. Gen. Soe accompanied by heads of police and representatives from other law enforcement agencies, appreciated the WCO’s explanations on the role of Customs in border security and confirmed that agencies under his authority would arrange a dialogue with Customs at several levels to ensure exchange of information.

Thant said the use of a range of WCO tools would be relevant for the implementation of the Cross-Border Transport Agreement that he would like to activate with Myanmar’s neighboring countries. He also stressed that the WCO’s assistance in the area of transit would be highly appreciated as Myanmar was looking into the ASEAN Customs Transit system. In addition, as Myanmar is gradually opening its borders after five decades of isolation, Thant emphasized the importance of Customs in assuring connectivity at borders.

Deputy Minister U pointed out the Myanmar Government’s twin deficits regarding its budget, with a tax to GDP ratio of 8%, and its trade with a high trade deficit caused by weak export capacity. He expressed a particular interest in strengthening capacity in the field of Customs valuation and offered his strong political support. Secretary General Mikuriya explained that a variety of WCO tools and programs are addressing revenue concerns in support of the increasing role of Customs in enhancing economic competitiveness, protecting society and ensuring security.

In Yangon, the economic center and former capital city and the location of the Customs Department’s Headquarters, Secretary General Mikuriya visited the Thilawa Special Economic Zone, which had quickly developed to attract many overseas companies since its establishment one and a half years ago, where Customs has implemented a modern operating model. He also went to see the Myanmar Automated Cargo Clearance System (MACCS) which was implemented in November 2016 at Customs’ Headquarters. He also had the opportunity to meet with the business community, which had noticed, after the introduction of the MACCS, a drastic acceleration in the Customs clearance, as well as an improvement in the business environment through enhanced integrity. 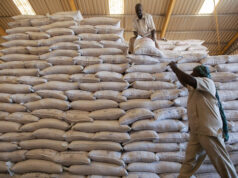