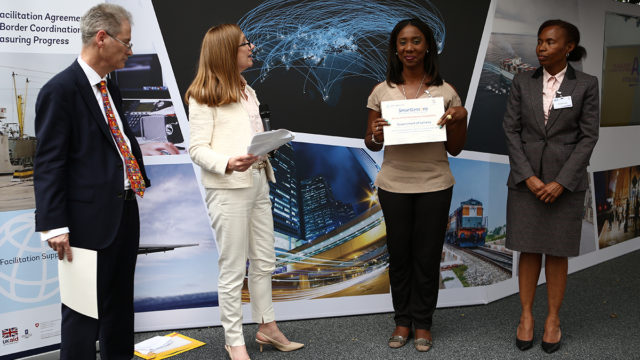 Trade facilitation can be a key contributor to sustainable development as speedier border crossings for goods and services help address poverty alleviation and even humanitarian crises, speakers at various sessions said at the Aid for Trade Global Review on 11-13 July in Geneva. A case study competition underlined the importance of the issue, with joint prize winners announced from Zambia and Jamaica.

The Chair of the WTO Trade Facilitation Committee, Ambassador Daniel Blockert (Sweden), opened a dedicated session on the topic on 12 July, highlighting the entry into force of the Trade Facilitation Agreement (TFA) last February.

The TFA contains provisions for expediting the movement, release and clearance of goods, including goods in transit. It also sets out measures for effective cooperation between customs and other appropriate authorities on trade facilitation and customs compliance issues. It further contains provisions for technical assistance and capacity building in this area. African countries and least developed countries (LDCs) are estimated in a recent WTO study  to benefit the most from the TFA’s implementation.

Malawi, an LDC, formally accepted the TFA and submitted its country’s instrument of acceptance on 12 July while the Gambia – also an LDC – did so on 11 July.

Trade facilitation is particularly important as trade volumes dwarf total disbursements of government aid and thus can be an important conduit for poverty alleviation, said Lord Bates, Minister of State at the United Kingdom Department for International Development, at the session on 12 July.

“You have global assistance of up to $180 billion per annum and then you have global trade in goods alone which is at $15.5 trillion per annum. In the sustainable development goals, we have an ambition of eradicating poverty by 2020. If we ought to achieve those goals, there is no doubt that trade has to be the mechanism through which we do it,” he said. “We are huge supporters and remain deeply committed to the Trade Facilitation Agreement.”

Panellists at the session then discussed best practices for successfully implementing trade facilitation reforms. Coordination among customs authorities and other government agencies in a country is important as are partnerships with the private sector, speakers said.

Sharing the private sector’s experience, Carlos Grau Tanner of the Global Express Association said: “One thing we have no control over is the border. The efficiency of the entire chain depends on the border… Here’s where the TFA is so crucial. We have seen the effects for our clients, for the countries we operate in when procedures are simplified and made more efficient.”

“We are seeing a real drive coming from e-commerce. It’s a real opportunity for us. Often you are looking for more predictability in delivery times and that is driving states to look more closely at how borders are organized,” he said.

The session also focused on the contribution of trade facilitation to responding effectively to humanitarian crises. Relief goods and services reach beneficiaries faster when border procedures are efficient, said Jemilah Mahmood, Under Secretary General of the International Federation of Red Cross and Red Crescent Societies.

“Just as goods cross the border, so do people and so do relief goods. The impact is so great and the need is for rapid relief goods. We need to think about the cross-border humanitarian issues as well,” she said. “Any delay in medicines, shelter will also have impact on people’s lives.”

So far, transparency measures related to trade facilitation appear to be well on their way to being implemented around the world; however, much remains to be done for the electronic exchange of information according to preliminary findings of the second United Nations Regional Commissions’ Global Survey on Trade Facilitation and Paperless Trade Implementation.

In regards to the Asia-Pacific region, UN Economic and Social Commission for Asia and the Pacific’s Chief of the Trade Facilitation Unit Yann Duval said there were wide differences across the 44 countries surveyed (the Pacific islands are furthest behind) but that the region in general has been very proactive in implementing next-generation trade facilitation solutions.

For Africa, the average implementation rate for the surveyed measures is around 50% said David Luke, Coordinator of the African Trade Policy Centre, United Nations Economic Commission for Africa. He pointed out, however, that wide differences exist, with countries such as Benin, Cote d’Ivoire and the Democratic Republic of the Congo ranking high. He said the conclusion of the Continental Free Trade Area (CFTA) Agreement by the end of the year should boost implementation efforts, since trade facilitation is “very much part” of the CFTA with specific provisions and legal text very compatible with the TFA.

Maria Rosaria Ceccarelli, Chief of Trade Facilitation Section, Economic Commission for Europe, said that the survey showed implementation of measures was even possible among lower-income countries if a proper implementation road map is set out and governments are committed to implementation.

Meanwhile, the 21 countries surveyed in the Latin American and Caribbean region have a 69% average implementation rate, a slight improvement over the 67% average in the 2015 survey according to Tania Garcia-Millan, Economic Affairs Officer, United Nations Economic Commission for Latin America and the Caribbean.

A side event on 12 July featured a live video link-up with the Busia one-stop border post between Kenya and Uganda. Busia is a busy border post connecting Eastern Uganda and Western Kenya, with a daily average of 210 trucks crossing to Uganda and 30 crossing to Kenya in 2013. A project was established to reduce the time taken to cross the border. By June 2016, the streamlined procedures had resulted in an 80% reduction in border crossing times from Busia Uganda to Busia Kenya compared to 2011 according to a survey while crossing in the reverse direction took 79% less time. More on Busia and other case studies here.

“This initiative has definitely lifted people out of poverty,” Amelia Kyambadde, Uganda Minister of Trade, Industry and Cooperatives said, noting that many cross-border traders are women. “It has lifted women, people, and the small businesses of Uganda out of poverty.”

Speaking about the reduction of goods inspections in Zambia thanks to the implementation of a risk-assessment mechanism, Ms Siame said: “What really drove us were private sector complaints. Their inventory were being kept at the border, they were tied up. With the new system of risk management principle, we did something different. We didn’t have to inspect 100% of goods and we were getting positive results and we were happy with that. Inspections were reduced from 100% to 18%.”

Ms. Tomlinson, meanwhile, emphasized the importance of partnerships in her case story titled “ Trade Facilitation Task Force: Involving public and private sectors to improve competitiveness”: “Many of you may have heard the phrase it takes two to tango. In Jamaica we say a bird cannot fly with one wing. This interdependent relationship between the private and public sectors is what formed the backbone of Jamaica’s taskforce for trade facilitation.”

More on trade facilitation here. – Text and photo from WTO