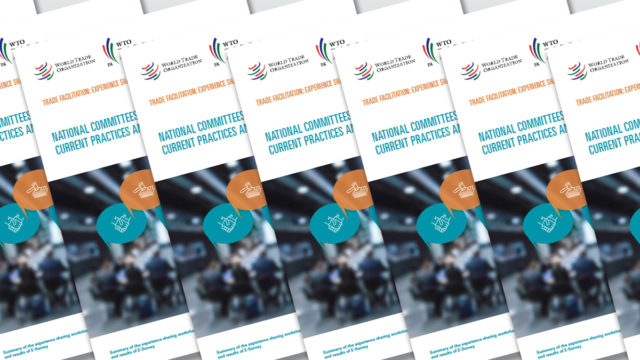 After the recent entry into force of the landmark Trade Facilitation Agreement (TFA), a new publication reports that many World Trade Organization (WTO) members have set up national bodies for coordinating the implementation of the Agreement and would like assistance to ensure their effective functioning. The publication released on 2 June details best practices for establishing a National Committee on Trade Facilitation (NCTF) based on a survey of over 100 members and observers as well as experiences shared at a 2016 workshop.

Among the survey respondents, 63% said they had already established their national committee as of November 2016. Furthermore, 27% of those with an established NCTF said they needed assistance while 42% of those still establishing their NCTF also called for help.

The TFA — which will help expedite the movement, release and clearance of goods across borders — entered into force on 22 February 2017. It requires WTO members to establish a national committee to facilitate domestic coordination for, and implementation of, the Agreement. However, it does not provide guidance on how such committees should be established.

The publication entitled “National Committees on Trade Facilitation: Current Practices and Challenges” aims to provide information on national experiences, best practices and recommendations with respect to the establishment and functioning of NCTFs.

It draws on the experiences shared by more than 35 speakers during a workshop that took place on 8 June 2016 at the WTO and on the results of an electronic survey conducted by the WTO Secretariat, which collected information on the practices of, and challenges faced by, 99 WTO members and six other countries in the process of acceding to the WTO.

The publication provides information on how to define an NCTF’s mandate and institutional framework, including its composition, participation of the private sector, and the role of the chairperson. It also provides guidance on roadmaps and the proper long-term functioning of an NCTF. The last section of the publication deals with the main challenges in establishing and maintaining an NCTF and highlights sources of technical assistance for the implementation of the TFA.

The publication highlights the experiences of members participating in the workshop in order to provide examples of differing approaches.