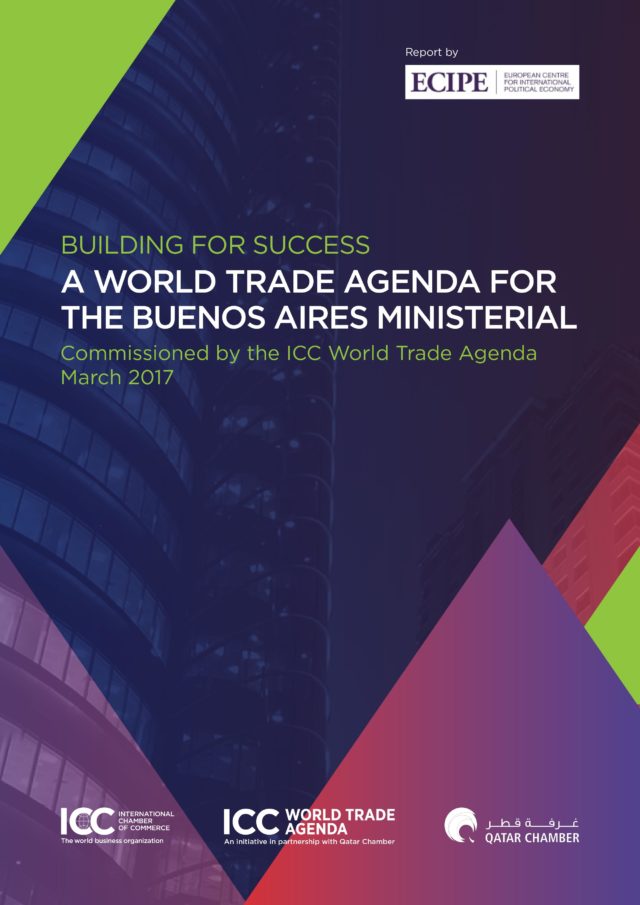 The global rules-based trading system has enabled “unprecedented progress in generating prosperity and alleviating poverty” around the world, yet growing nationalist and protectionist trends are imperilling its future, notes the new ECIPE report.

“Building for Success” argues that the World Trade Organisation (WTO) should respond to current challenges with renewed action, “deploying better defences against protectionism and crafting actions that would have a meaningful impact on trade and economic growth”—especially in the area of digital trade policy.

The report was developed as part of the World Trade Agenda initiative—a partnership between ICC and the Qatar Chamber of Commerce and Industry—and released at a major ICC event in London. The World Trade Agenda mobilises global business to help governments set key multilateral trade negotiation priorities.

John Danilovich, ICC Secretary General said: “We continue to face the challenge of global growth being too low and benefiting too few. This is the defining economic test of our times—and we urge all governments to take concerted and urgent action to enable inclusive growth. A retreat into protectionism would be the wrong response to this challenge. We need to see a concerted effort in the coming months to launch new WTO talks to restore trade growth for the benefit of all.”

Digital trade policy merits particular attention from the WTO, the report argues, as new technologies are fundamentally changing the structure and functioning of the global economy. Moreover, current trading rules were crafted at a time when digital trade did not exist.

The digitalisation of the economy has made some services tradable for the first time in banking, insurance, communication and media markets. It has also transformed many goods into services as entertainment and software products that were once physically distributed are now provided online.

The inherent ‘globalness’ of the digital environment—where data flows in an online borderless world—also means that effective trade policies must be taken at the international level.