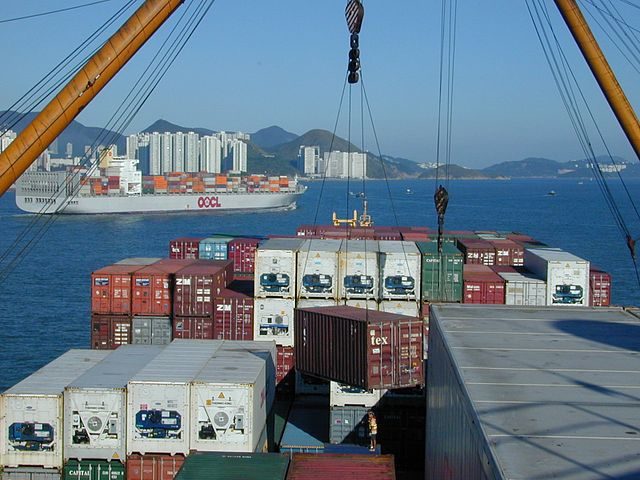 Hong Kong’s total exports of goods (comprising re-exports and domestic exports) decreased by 1.8% in October from a year earlier to HKD313.7 billion (US$40.4 billion) after a year-on-year growth of 3.6% in September 2016, according to the Census and Statistics Department (C&SD).

A visible trade deficit of HKD37.2 billion was recorded in October 2016, said the report.

For the first 10 months of 2016, the value of total exports of goods dropped by 2.5% from the same period last year. Re-exports fell by 2.4%, while domestic exports declined by 10.2%. Concurrently, the value of imports of goods slipped back by 2.9%.

Comparing the three-month period ending October 2016 with the preceding three months on a seasonally adjusted basis, total exports of goods inched up by 1.9%. Re-exports rose by 1.8%, while domestic exports went up by 8.0%. Meanwhile, imports grew by 3.0%.

Exports to Asia in October went down by 0.9% year-on-year, registering declines from some major destinations, in particular Thailand, Japan, Vietnam, India, and South Korea. But increases were recorded in exports to Taiwan and Singapore, while exports to China remained unchanged.

For the first 10 months of 2016, year-on-year decreases were registered in exports to Vietnam, Japan, Germany, U.S., South Korea, and the mainland, balanced by year-on-year hikes in shipments to India and Taiwan.

Year-on-year, smaller export values were registered in October for most principal commodities, including telecommunications and sound recording and reproducing apparatus and equipment, non-metallic mineral manufactures, and miscellaneous manufactured articles. However, an increase was registered for electrical machinery, apparatus and appliances, and electrical parts.

For the first 10 months of 2016, year-on-year falls were recorded in total exports of some principal commodities, in particular office machines and automatic data processing machines, telecommunications and sound recording and reproducing apparatus and equipment, and miscellaneous manufactured articles. In contrast, a year-on-year spike was registered in electrical machinery, apparatus and appliances, and electrical parts.

A government spokesman noted that the value of merchandise reverted to a slight decline in October from a year earlier, after having registered growth in the preceding two months, with mixed performance across major markets.

The spokesman commented further that Hong Kong’s export outlook in the near term will still hinge on global demand conditions.

“The external trading environment is still subject to uncertainties, including those associated with the US policy directions after the general election. Moreover, the US monetary policy normalization, monetary policy divergence among major central banks, unfolding Brexit event and heightened geopolitical tensions in various regions are also causes for concern.”