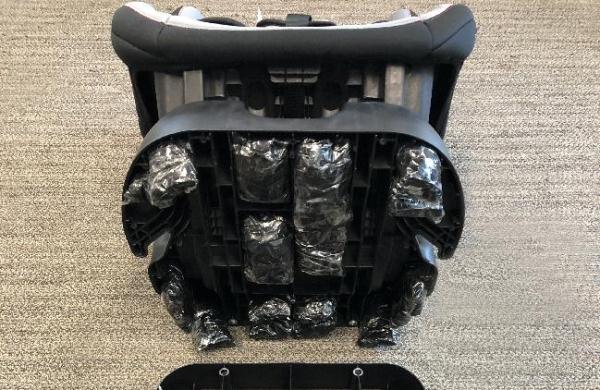 About 51.5 kilograms of suspected methamphetamine with an estimated market value of about HKD32 million (US$4 million) was seized by Hong Kong Customs on February 18.

This is the first drug trafficking case detected by Customs involving a self-service container yard, the agency said in a release.

Customs officers on that day inspected a seaborne consignment, declared as carrying baby car seats, that arrived in Hong Kong from Cambodia at a container yard in Yuen Long, a town in the western New Territories.

Upon examination, the batch of suspected methamphetamine was found concealed inside the false compartments of 32 baby car seats.

Customs’ investigations revealed that drug trafficking syndicates adopted a circuitous transportation route after the drugs had arrived in Hong Kong and used a self-service container yard at Tsing Yi for temporary storage.

After follow-up investigation, Customs officers arrested two men suspected to be in connection with the case in Kwun Tong and Chai Wan on March 7 and March 8, respectively.

Investigation is ongoing, the agency said.