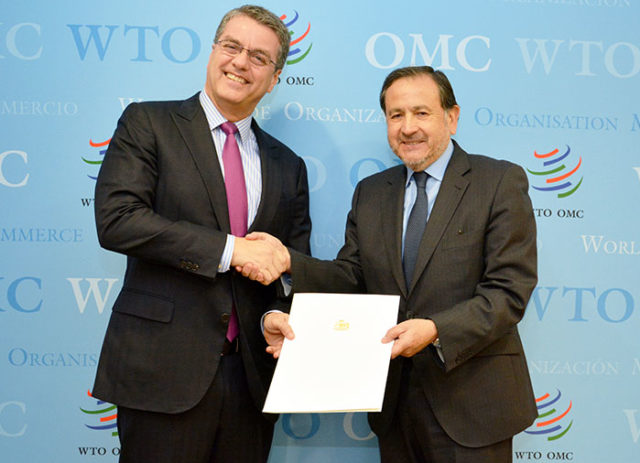 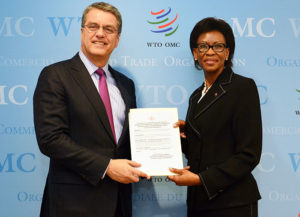 Chile and Swaziland have ratified the Trade Facilitation Agreement (TFA). Their submission of the instruments of acceptance to the World Trade Organization (WTO) on 21 November means that nearly 90 per cent of the ratifications needed to bring the TFA into force have now been received.

Chile’s WTO ambassador Héctor Casanueva and Swaziland’s WTO ambassador Njabuliso Busisiwe Gwebu submitted their respective country’s instrument of acceptance to WTO Director-General Roberto Azevêdo, making them the 97th and 98th WTO members to do so. Swaziland is the 13th least developed country (LDC) to have presented its instrument of ratification. On 23 July 2014, Chile submitted its Category A notification to the WTO outlining which substantive provisions of the TFA it intends to implement upon entry into force of the Agreement. Swaziland is still to do so.

The TFA will enter into force once two-thirds of the WTO membership has formally accepted the Agreement.

On 8 June the WTO hosted an experience-sharing event to help members identify best practices and the challenges faced by WTO members in establishing or maintaining national trade facilitation committees.  It was the first such event to discuss how best to implement specific commitments under the TFA.  Experts from more than 20 countries and five international organizations made presentations at the workshop; the presentations and other information on the event are available here.

Implementation of the WTO Trade Facilitation Agreement has the potential to increase global merchandise exports by up to $1 trillion per annum, according to the WTO’s flagship World Trade Report released on 26 October 2015.  Significantly, the Report also found that developing countries will benefit significantly from the TFA, capturing more than half of the available gains.