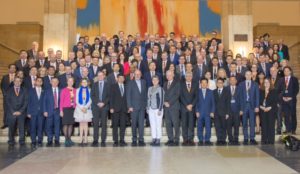 The 12th Asia-Europe Meeting (ASEM) adopted October 17 the Berlin Declaration, a joint statement that sets out future targets and actions for customs cooperation among members of the ASEM.

The meeting held in Berlin, Germany on October 16-17, 2017 brought together the customs directors-general from the European and Asian member states of ASEM, along with representatives from the European Commission. The World Customs Organization (WCO) also attended as an observer.

Representatives from 45 European and Asian member states engaged in joint discussions with the European Commission and the WCO, focusing in particular on specific measures to facilitate trade, safeguard supply chains, combat piracy and counterfeiting, and promote environmental and consumer protection.

Commenting on the meeting, Uwe Schröder, director of Germany’s Central Customs Authority, stated: “The meetings of ASEM Customs Directors-General are of great importance. Customs authorities in both Asia and Europe face the same challenges in connection with processes of globalisation: How can we facilitate and expedite the movement of goods while simultaneously ensuring safety and security for businesses and private citizens? We held in-depth discussions on these issues, and the Berlin Declaration now gives us plenty of homework to do in the coming two years.”

The talks resulted in the Berlin Declaration, which outlines the targets and priorities of European-Asian cooperation and, in particular, sets out a specific plan of action for 2018 and 2019.

New actions have been added to the plan, including in the areas of transit, single window, automation, and integrated risk assessment, said WCO in a statement.

The 13th ASEM Customs Directors-General and Commissioners Meeting will take place in Vietnam in 2019.

The ASEM is an international forum established in 1996 to foster dialogue and cooperation. Today ASEM encompasses 53 members. ASEM focuses on a variety of policy fields. In the area of customs, participating countries work on the alignment, streamlining, and harmonization of customs procedures. They also coordinate strategies to combat illegal activity, including terrorist activity. ASEM customs directors-general gather for joint talks every two years, and the meetings rotate between Asia and Europe.