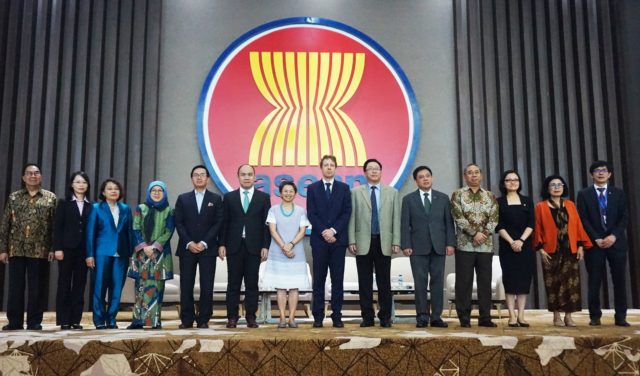 Amid global economic uncertainties, ASEAN’s combined GDP reached US$3.0 trillion in 2018 as compared to $2.5 trillion in 2015, making the region the fifth largest economy in the world, according to the new “ASEAN Integration Report (AIR) 2019.”

Intra-ASEAN trade accounted for the largest share of ASEAN’s total trade and FDI inflows in 2018 at 23.0% and 15.9%, respectively.

The report highlights that four years into the implementation of the ASEAN Economic Community (AEC) Blueprint 2025, ASEAN economic integration has borne results in a number of areas but overall remains a work in progress.

“There is a need for ASEAN to deepen and broaden intra-ASEAN trade and investment linkages, while simultaneously keeping markets open through strengthened partnerships with economies around the world. [The report] likewise indicates the need for ASEAN to be a more proactive global player,” the ASEAN Secretarial said in a statement.

The report also underscores the need for ASEAN to prepare itself for the future, including in the context of the fourth industrial revolution and sustainability considerations.

In terms of trade in goods, full operationalization of the overdue ASEAN Single Window initiative continues. To date, seven ASEAN member states (AMSs) have joined the live operation, with the rest expected to come on board within 2019.

Meanwhile, the ASEAN-wide Self Certification project is now at its final stage, with expected operationalization in 2020.

Other initiatives on trade facilitation include the ASEAN Seamless Trade Facilitation Indicators, adopted in 2017; the ASEAN Tariff Finder; and the ASEAN Solutions for Investments, Services, and Trade, a consultative mechanism for ASEAN-based enterprises on ASEAN economic agreements.

Meanwhile, key developments towards ASEAN customs cooperation are the signing of the ASEAN Framework Agreement on the Facilitation of Goods in Transit (AFAFGIT) Protocol 2, and the ratification by all AMSs of Protocol 7 (Customs Transit System) to support the implementation of the AFAFGIT.

Implementation of the ASEAN Customs Transit System (ACTS), which aims to enable free movement of trucked goods between participating countries, is piloted in two corridors i.e. North-South and East-West, with expected “full live operation” in 2020.

On investment, the Second, Third, and Fourth Protocols to Amend the ASEAN Comprehensive Investment Agreement to improve investment cooperation have been signed.

On financial integration, key achievements include the completion of the eight packages of commitments on financial services liberalization under the ASEAN Framework Agreement in Services (AFAS); the start of negotiations on the Ninth Package of Commitments; and the signing of the Financial Services Annex in the ASEAN Trade in Services Agreement (ATISA).

On efforts toward a competitive ASEAN region, currently nine out of ten AMSs have competition laws in place, with Cambodia expected to enact its competition law in the near term.

Meantime, as of now, nine AMSs have enacted their Consumer Protection Act, while Cambodia’s consumer protection legislation is expected to be enacted in 2020.

At the regional level, the ASEAN High-Level Principles for Consumer Protection provide a common baseline for cooperation and exchange of experiences and best practices.

Noteworthy intellectual property (IP)-related initiatives since 2016 include the ASEAN Common Guidelines for the Substantive Examination of Trademarks and of Industrial Designs in 2017 and 2018, respectively; work under the ASEAN Patent Examination Cooperation; enhancements to the databases on registered trademarks and design registrations, namely the ASEAN TMView and DesignView platforms and the development of the ASEAN Geographical Indications Database; and the establishment of the ASEAN Network of Enforcement Experts.

Further, good regulatory practices (GRP) are newly embraced in the AEC agenda, appearing as a new focus area in the AEC Blueprint 2025.

Key achievements in this area are the adoption of the non-binding ASEAN GRP Core Principles in 2018 to assist AMS in improving their regulatory practice, and finalizing of the Baseline Study on Regulatory Management Systems in ASEAN.

In addition, there are also GRP-related initiatives in specific sectors, such as the adoption of the NTM (Non-Tariff Measures) Guidelines, and the updating in 2018 of the 2009 ASEAN Guidelines on GRP.

Continued progress has also been made to upgrade the ASEAN Highway Network road networks as well as complete the missing links of the Singapore-Kunming Rail Link, two key land transport initiatives in the region.

In 2017, the region also saw the signing of the ASEAN Framework Agreement on the Facilitation of Cross-Border Transport of Passengers by Road Vehicles, along with the adoption of key documents on sustainable transport.

In maritime transport cooperation, key achievements include the launching of the ASEAN Roll-on Roll-off Sea Linkage Route between Davao-General Santos, the Philippines, and Bitung, Indonesia, in 2017.

On e-commerce, a key milestone was the signing of the ASEAN Agreement on Electronic Commerce in 2018 to contribute to creating an environment of trust and confidence in the use of e-commerce in the region.

A closely related initiative is the ASEAN Digital Integration Framework, which was adopted in 2018, and for which an action plan is being finalized.

In the energy sector, the region achieved a 21.9% reduction in energy intensity in 2016, surpassing the 2020 target of 20.0%. The region has also set an aspirational target of 23.0% share of renewable energy in the ASEAN energy mix by 2025, and is working on accelerating the deployment of renewable energy, which, as of 2016, stood at 12.4% of ASEAN’s total energy mix. ASEAN also actively promotes the use of clean coal technologies.

To further enhance the sustainability and competitiveness of the region’s food, agriculture, and forestry (FAF) sector, initiatives include in the case of agricultural sector, the ASEAN Public-Private Partnership Regional Framework for Technology in FAF Sectors and the ASEAN Roadmap for Enhancing the Role of Agricultural Cooperatives in Global Agricultural Chains, launched in 2017 and 2018 respectively; and the Work Plan for Forest Law Enforcement and Governance, adopted in 2016, in the case of forestry sector.

To advance food security in the region, the ASEAN Plus Three Food Security Information System has been further strengthened since 2016 to allow data collection and dissemination among the participating countries.

A number of initiatives were also pursued to meet ASEAN’s objective to become a sustainable tourism destination, namely, the Pakse Declaration on ASEAN Roadmap for Strategic Development of Ecotourism Clusters and Tourism Corridors (2016) and the ASEAN Sustainable Tourism Award (2016).

ASEAN’s cooperation in the area of science and technology (S&T) saw the adoption of the ASEAN Declaration on Innovation by ASEAN Leaders in 2018, followed by the development of the ASEAN Innovation Roadmap in 2019.

In 2018, the sectoral ministerial and senior official bodies overseeing S&T matters also saw the inclusion of the term “innovation” into their name, reflecting the long-term commitment of the S&T agenda towards productivity-driven growth and innovation.

Work continues to develop MSMEs, especially with the adoption of the ASEAN Regional Principles on Good Business Registration Practices and the setting up of various platforms to assist MSMEs, such as the ASEAN Online Academy, ASEAN Business Incubator Network and the ASEAN Mentorship for Entrepreneurs.

On the Regional Comprehensive Economic Partnership (RCEP), negotiations are being intensified to conclude the deal.

The Fourth Industrial Revolution(4IR) has been high on ASEAN’s agenda since 2017. In 2018 alone, the region saw the completion of the “Assessment of ASEAN’s Readiness for the 4IR,” along with the signing of the ASEAN Agreement on Electronic Commerce, as well as the endorsement of the ASEAN Digital Integration Framework and the ASEAN Framework on Digital Data Governance.

The 4IR has also featured prominently in Thailand’s 2019 ASEAN Chairmanship, where five out 13 priority economic deliverables this year are focused on this emerging issue.

As a next step, ASEAN will develop a consolidated strategy on the 4IR, which will articulate clearly and holistically ASEAN’s 4IR agenda and directions.