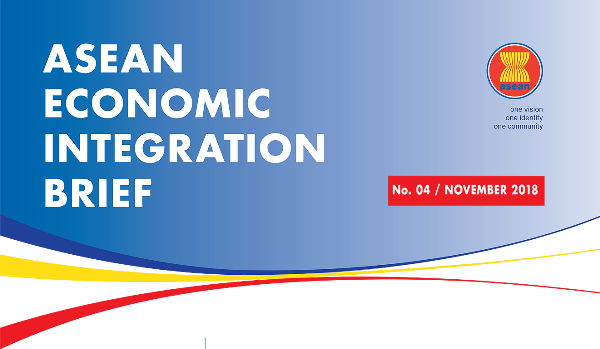 The fourth issue of AEIB, covering developments since July 2018, said economic priority deliverables under the AEC Blueprint 2025 continue to be implemented with a number of achievements attained during the period.

The ASEAN Agreement on Electronic Commerce was signed on November 12 by the ASEAN economic ministers (AEM) at the 33rd ASEAN Summit. The accord seeks to facilitate cross-border e-commerce transactions, create an environment of trust and confidence in the use of e-commerce, and strengthen cooperation in intensifying the use of e-commerce in the region.

Other key achievements, according to the AEIB, include the adoption of the ASEAN Digital Integration Framework at the 50th AEM Meeting. The framework identifies six priority areas to be implemented over the next 12 to 18 months to promote digital integration: facilitate seamless trade, protect data while supporting digital trade and innovation, enable seamless digital payments, broaden the digital talent base, foster entrepreneurship, and coordinate actions.

Also signed is the Protocol to Amend the ASEAN Trade in Goods Agreement by the AEM to allow ASEAN-wide self-certification to be operationalized.

The Protocol to Implement the Tenth and Final Package of Commitments of the ASEAN Framework Agreement on Services has also been signed by the AEM. Moreover, the ASEAN Trade in Services Agreement is expected to be finalized this year following significant progress in negotiations.

At the 50th AEM Meeting, the AEM welcomed the commitment by ASEAN member states to transition the ASEAN Comprehensive Investment Agreement’s (ACIA) reservation lists to a two-annex negative list. Discussions are also ongoing to enhance the commitments under ACIA.

Meanwhile, following the 36th ASEAN Ministers on Energy Meeting on October 29, 2018, key developments for the energy-sector priority economic deliverables include:

In addition, there were other key developments in other AEC sectors.

The ASEAN Common Guidelines on Industrial Designs was endorsed at the 50th AEM Meeting and published in September 2018.

The ASEAN Good Regulatory Practice (GRP) Core Principles were adopted at the 50th AEM Meeting. These are a practical, non-binding set of principles to guide the mainstreaming of GRP into ASEAN work and fostering ASEAN-wide regulatory cooperation.

The ministers endorsed the following: AMAF’s Approach to Gender Mainstreaming in the Food, Agriculture and Forestry Sectors; ASEAN Guidelines for Agroforestry Development; and ASEAN Roadmap for Enhancing the Role of Agricultural Cooperatives in the Global Agricultural Value Chain 2018-2025.

The ASEAN Smart Cities Network (ASCN) was established at the 32nd ASEAN Summit held on April 28, 2018 to serve as a platform for ASEAN cities to work together towards smart and sustainable urban development. The 26 ASCN pilot cities have finalized their Smart Cities Action Plans specifying their respective focus areas and priority projects. The ASEAN Smart Cities Framework, a non-binding guide for smart city development in ASEAN, was adopted by the leaders at the 33rd ASEAN Summit in November.

On operationalizing the AEC 2025 Monitoring & Evaluation Framework, the AEC 2025 Consolidated Strategic Action Plan has been updated and made available online in the ASEAN website on August 14, 2018.

On statistical cooperation, the ASEAN Community Statistical System (ACSS) Committee on October 12, 2018 adopted the ACSS Protocol for New Data Request from ASEAN Sectoral Bodies to allow for more effective support to integration monitoring. The committee also adopted the Concept Note on the ACSS Open Data Initiative for Statistics to promote open data practices as well as data transparency at the national and regional levels.

On external economic relations, the AEM endorsed at the 50th AEM Meeting the recommendations of stage two of the General Review of the ASEAN-Australia-New Zealand Free Trade Agreement, and welcomed the completion of the Joint Feasibility Study for an ASEAN-Canada Free Trade Agreement.

First launched in June 2017, the AEIB has been providing periodic updates on the progress of ASEAN economic integration, as well as global and regional developments relevant to ASEAN.