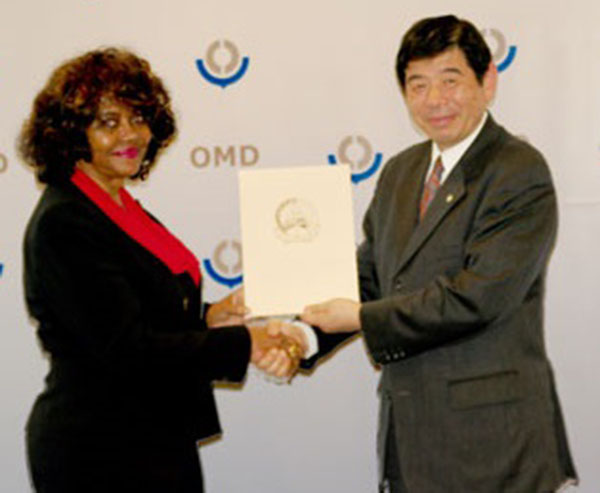 World Customs Organization Secretary General Kunio Mikuriya received the Instrument of accession of Angola to the International Convention on the Simplification and Harmonization of Customs Procedures (Revised Kyoto Convention or RKC) on February 23, 2017 from the Ambassador of Angola to Belgium, H.E Ms. Maria Elizabeth Simbrão de Carvalho.

With the accession of Angola, the Convention now has 108 contracting parties.

Having entered into force on 3 February 2006, the Revised Kyoto Convention is a WCO legal instrument regarded by the entire international Customs Community as a blueprint for modern Customs in 21st Century, which complements countries’ efforts towards the ratification and the implementation of the World Trade Organization Agreement on Trade Facilitation (TFA) which entered into force on February 22.

In an international environment marked by the will to implement fairly quickly the TFA, the WCO welcomes the fact that the number of Contracting Parties to the RKC continues to grow, especially as this instrument is at the core of the WCO’s Economic Competitiveness Package (ECP). WCO’s Mikuriya strongly encourages the rest of the WCO’s Members to accede to the RKC as soon as possible, given this instrument’s significance for Customs, and above all to implement its provisions.

Among others, the Convention’s key elements include the application of simplified Customs procedures in a predictable and transparent environment, the optimal use of information technology, the utilization of risk management for efficient Customs control, a strong partnership with the trade and other stakeholders, and a readily accessible system of appeals.