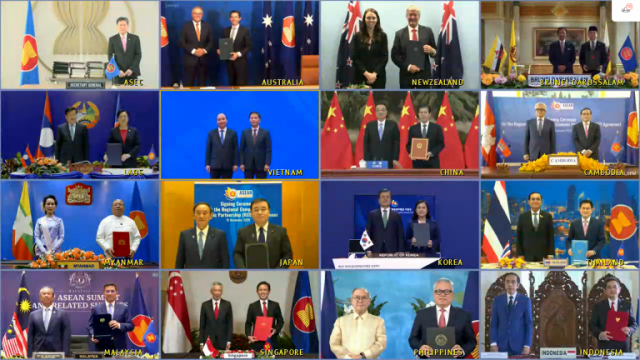 The RCEP was signed over a video link on November 15, becoming the world’s largest free trade deal, covering 2.2 billion people and 30% of the world’s economic output.

The China-led deal sets the terms of trade in goods and services, cross-border investment and new rules for increasingly important areas such as e-commerce and intellectual property.

In a joint statement, the leaders of the countries said the trade deal will form a crucial part of their plans to recover from the pandemic, which has forced countries around the world to lock down their economies.

With the signing, the RCEP has become the world’s largest trading bloc, representing about a third of the world’s gross domestic product (GDP) and population even without India.

It would have covered another 1.4 billion people had India not pulled out of negotiations last year. India balked over concerns the deal would hurt small businesses and small-scale farmers in the country.

However, the remaining 15 RCEP members are making a special arrangement to leave the door open for India’s possible return in the future.

While not as tightly integrated as the EU pact or the US-Mexico-Canada agreement, the deal is seen as a significant step towards removing trade barriers, as well as extending the influence of China.

A victory of multilateralism

The Chinese premier, Li Keqiang, described the deal as “a victory of multilateralism and free trade,” according to a report by the state-run Xinhua news agency.

Negotiations for RCEP began in 2012, with China pushing it as an alternative to the US-led Trans-Pacific Partnership (TPP). President Donald Trump later pulled the United States out of TPP talks, and a revised deal was signed among the remaining 11 countries including Japan.

RCEP will be Japan’s first trade deal with both China, its largest trading partner, and South Korea as negotiations for a trilateral pact have yet to be concluded.

Japan’s trade minister Hiroshi Kajiyama told media the 15 countries were seeking to wrap up domestic procedures and put the pact into effect “as quickly as possible.”

The deal will take effect after ratification by six members of the ASEAN and three of the other countries.

Despite RCEP’s historic size, the agreement is loose enough to stretch to fit the disparate needs of member countries as diverse as Australia, Myanmar, Singapore and Vietnam. For instance, it does not establish unified standards on labor and the environment, or commit countries to open services and other vulnerable areas of their economies.

RCEP negotiations were formally launched in November 2012 at the ASEAN Summit in Cambodia with the aim of boosting economic cooperation, market access between the 10 ASEAN countries and their six dialogue partners.

Photo courtesy of Department of Trade and Industry