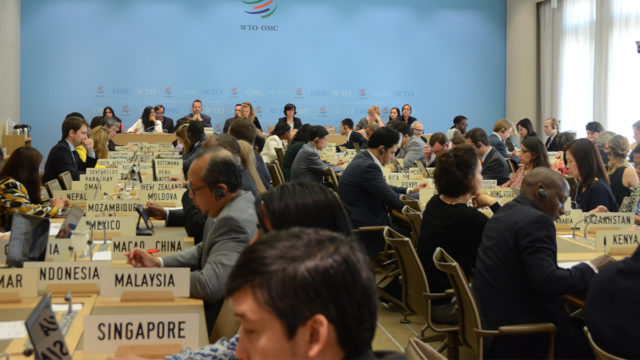 World Trade Organization (WTO) members gathered on 16 May for the inaugural meeting of the Committee on Trade Facilitation, the body responsible for overseeing implementation of the WTO’s historic Trade Facilitation Agreement (TFA).

Concluded at the WTO’s 2013 Bali Ministerial Conference, the TFA entered into force on 22 February 2017 following its ratification by two-thirds of the WTO membership. In line with the Agreement, the Committee on Trade Facilitation was established in order to provide WTO members a forum to consult on matters related to the operation of the TFA and the advancement of its objectives.

At the inaugural meeting, members elected Ambassador Daniel Blockert (Sweden) as chair of the committee.

“Having the committee now in session marks an important milestone in our longstanding efforts to foster the facilitation of trade around the globe,” Ambassador Blockert said. “We have finally reached the stage where our collective engagement over the past years is bearing fruit. In doing so, we are testimony of what can be achieved – even under challenging circumstances – when working in coalitions of a common cause.”

The chair said there were a few procedural matters to settle before the new committee could undertake its assigned tasks, and that he would be consulting with members before reconvening the committee with the goal of adopting an agreed framework.

A seminar will be held on 2 June at WTO headquarters to commemorate the entry into force of the TFA.  Members will review the negotiating history of the TFA and be invited to share their thoughts on how to secure effective implementation of the Agreement.

Since its entry into force, six additional WTO members — Dominican Republic, Guatemala, Armenia, Fiji, Costa Rica and Sierra Leone — have submitted their instruments of TFA acceptance to the WTO.  This brings up to 118 the number of WTO members that have ratified the Agreement.

The TFA will help expedite the movement, release and clearance of goods across borders. Full implementation of the TFA is forecast to slash members’ trade costs by an average of 14.3 per cent, with developing countries having the most to gain, according to a 2015 study carried out by WTO economists. The TFA is also likely to reduce the time needed to import goods by over a day and a half and to export goods by almost two days, representing a reduction of 47 per cent and 91 per cent respectively over the current average.

Developed countries have committed to immediately implement the Agreement. Developing countries, in comparison, will immediately apply only the TFA provisions they have designated as “Category A” commitments.

A Trade Facilitation Agreement Facility (TFAF) was created at the request of developing and least-developed countries to help ensure they receive the assistance needed to reap the full benefits of the TFA and to support the ultimate goal of full implementation of the new agreement by all members. – WTO