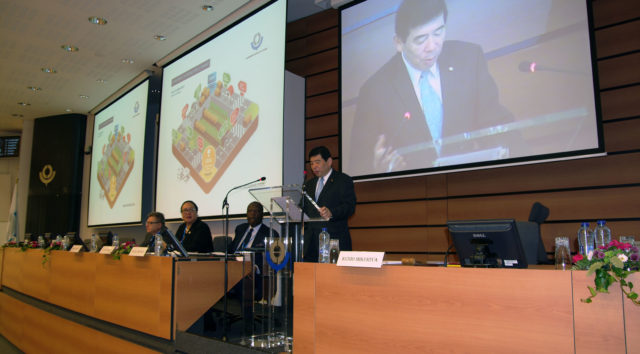 The World Customs Organization (WCO) has launched new Transit Guidelines, a tool for the facilitation of transit and establishment of efficient transit regimes, at the first Global Conference on Transit in Brussels.

More than 200 high-level delegates from more than 80 countries, including heads of Customs administrations, international organizations, development partners, the private sector and academia attended the Conference, which came after the annual WCO Council Sessions.

Among the attendees were the Minister of Finance of Zambia, Felix Mutati; the Minister in Charge of Customs Cooperation of the Eurasian Economic Commission, Mukai Kadyrkulov; the Under-Secretary-General and High Representative of the Office of the High Representative for the Least Developed Countries, Landlocked Developing Countries And Small Island Developing States (UN-OHRLLS), Fekitamoeloa ‘Utoikamanu; the Senior Vice-President of the Japan International Cooperation Agency, Kenichi Tomiyoshi; the Deputy Executive Secretary of the United Nations Economic Commission for Europe, Andrey Vasilyev; the Vice-President of the Asian Development Bank, Wencai Zhang; the Secretary General of the Intergovernmental Organisation for International Carriage by Rail, François Davenne,; and the Secretary General of the International Road Transport Union, Umberto de Pretto.

Panelists agreed on the usefulness of the Transit Guidelines for further developing and implementing their respective transit systems. They urged the WCO to continue to update the Guidelines as a platform for future standardization of transit systems.

WCO Secretary General Kunio Mikuriya, in his opening speech, said transit enables not only goods but also countries to draw closer to each other in economic, political and social terms.

Zambia’s Mutati congratulated the WCO for holding such a conference, adding that WCO efforts toward the improvement of transit systems, simplification and harmonization of Transit rules, and capacity-building initiatives supporting land-locked developing countries (LLDCs) to prosper together through a concerted effort will ensure an enhancement of revenue for these countries.

The UN-OHRLLS’ ‘Utoikamanu, underlined the importance of transit facilitation for economic development of LLDCs as reflected in the Vienna Programme of Action for 2014-2024.  Regional economic communities, such as Common Market for Eastern and Southern Africa, Southern African Development Community, and Economic Community of West African States, confirmed that transit continues to top their regional integration and development agendas for Africa.

Customs administrations play a prominent role in the smooth movement of transit goods and, as a result, are in a position to support economic development, particularly in LLDCs. This is why the WCO began developing the Transit Guidelines with the aim of harmonizing different transit frameworks, unlocking the potential of LLDCs, and taking practical steps towards efficient transit regimes as foreseen by international legal frameworks such as the World Trade Organization Trade Facilitation Agreement, the Vienna Programme of Action, and the Revised Kyoto Convention.

The Transit Guidelines contain 150 guiding principles and a variety of practical experiences of implementing efficient transit regimes, as shared by WCO Members and have been issued in four languages: English, French, Spanish and Russian. – WCO