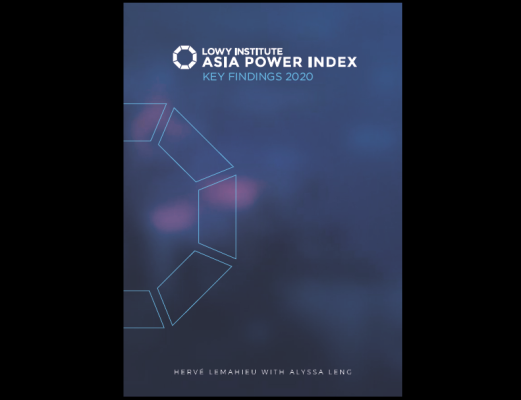 The United States remains the most powerful country in Asia but its relative power has waned in 2020 due to its handling of the COVID-19 crisis, while China has been diplomatically diminished but holding ground in its overall power, according to a new report.

The Lowy Institute Asia Power Index 2020 ranks the relative power of 26 countries and territories in the Asia-Pacific in terms of capacity to shape their external environment. To do this, it uses 128 indicators across eight categories: economic resources and relationships, military capability and defence networks, diplomatic and cultural influence, and resilience and future resources.

Lowy Institute, an international policy think tank located in Sydney, Australia, said in the annual report that the COVID-19 pandemic has accelerated the shifts in power and “rushes in a new regional disorder, in a race to the bottom between Asian powers.”

Eighteen states in the Indo-Pacific experienced significant downward shifts in their relative power in 2020, said the report published this month.

The coronavirus has also accelerated a rebalancing of global power. Divergent national responses to COVID-19 have sharpened the contrasts—and narrowed the power differential—between the United States and China.

Among the index’s key findings is that while the US remains the most powerful country in the region, it registered the largest fall in relative power of any Indo-Pacific country in 2020.

“Despite its continuing pre-eminence, US standing has waned in all but one of the eight Index measures,” said the report.

“A ten-point overall lead over China two years ago has been narrowed by half in 2020. This closing power disparity suggests that Washington, far from being the undisputed unipolar power, can more correctly be described as the first among equals in a bipolar Indo-Pacific.”

China, ranked number 2, has emerged diplomatically diminished from the pandemic. But Beijing is holding ground in its overall power, said the annual report, which was initially released in 2018.

“In conditions where most countries are less powerful than a year ago, China’s fast economic rebound from COVID-19 will widen the power differential between itself and the rest of the region,” said the report.

In 2020, China had the biggest gains in cultural influence. It lost the most points in diplomatic influence. Elsewhere, it improved in economic relationships and military capability, while trending down in economic capability.

Meanwhile, India, ranked no.4, has fallen just short of the major power threshold in 2020 and its position as a future peer competitor to China has become less certain.

Asia’s second most populous country is now considered to be a high-performing middle power in the Indo-Pacific. India is more than likely to recover its major power status in coming years. Of all countries in the Indo–Pacific, India’s economy has lost the most growth potential through the damage inflicted by the pandemic.

In third place, Japan will take most of the decade to recover from the economic fallout of the pandemic, said the report. Aside from the premature resignation of Prime Minister Shinzo Abe, the country has had to deal with an unusually challenging set of circumstances this year. These include a recession due to the COVID-19 pandemic and a demographic decline that is adversely impacting productivity. Japan’s eventual recovery to pre-COVID levels of economic output is around 2027.

The middle powers—Vietnam (12th place), Australia (6th) and Taiwan (14th)—are the only countries to gain relative power in 2020.

Besides their competent handling of the COVID-19 pandemic, the trio have each sought at the margins to shape the regional order, even if none is powerful enough to dictate it.

“The performances of these three powers illustrate how the future is likely to be defined by asymmetric multipolarity. When neither the United States nor China can establish undisputed primacy in Asia, the actions, choices and interests of middle powers will become more consequential,” said the report.

Vietnam has become an effective multilateral player in regional forums and trade initiatives—whether in terms of steering negotiations for the Regional Comprehensive Economic Partnership agreement as ASEAN chair, or as one of 11 countries to have resuscitated the Trans-Pacific Partnership.

Australia’s comparative advantages are in its defence networks, where it ranks second behind the United States.

“Despite a far more modest military capability, Australia is ranked ahead of the United States for its defence diplomacy with non-allied partners. It carries less ‘great power baggage’ and has demonstrated it can be far nimbler in Southeast Asia than its US ally,” said the report.

Taiwan—ranked 14th for overall power—remains of central, strategic importance to the regional balance of power. Backed by the United States, it presents a formidable check on China’s aspirations to become a fully-fledged sea power. Taiwan performs best in the economic capability measure.

Taiwan remains a diplomatic outsider in the region, with its lowest ranking in the diplomatic influence measure, coming in at 19th place. However, Taipei’s competent handling of the COVID-19 pandemic has boosted its international reputation.