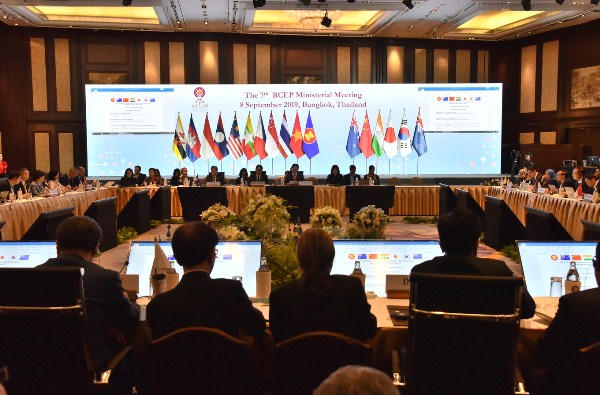 Thailand will hold bilateral negotiations with Japan, New Zealand, and India in an attempt to finish talks on the Regional Comprehensive Economic Partnership (RCEP) by November.

Local media quoted Auramon Supthaweethum, director-general of the Trade Negotiations Department of Thailand, as saying the country has scheduled bilateral discussions with the three partners during the next negotiating round to be held in Da Nang, Vietnam on September 19-27.

The bilateral negotiations will attempt to thresh out differences on contentious issues such as opening markets for sensitive goods and services.

Last September 8 at the RCEP Ministerial Meeting in Bangkok, Thailand, economic ministers from ASEAN’s 10 member states and their six trade partners expressed determination to conclude the RCEP by the end of the year.

The regional initiative was launched in November 2012 with the aim of boosting economic cooperation between ASEAN and the six dialogue partners, namely, China, Japan, the Republic of Korea, Australia, India and New Zealand.

After seven years, negotiations have reached a critical milestone as the ministers are resolved to address the outstanding issues and conclude the pact.

Negotiators from all the participating countries have concluded talks on seven articles from a total of 20, including customs and trade facilitation, state procurement, economic and technical cooperation, and small and medium-sized enterprises.

The 13 remaining articles concern various issues such as intellectual property rights, telecommunications, and market expansion for goods, services and investment.

The talks have been hampered by the lack of free trade agreements between some partners, such as China-Japan, India-China, and India-Australia-New Zealand.

As the ASEAN chair this year, Thailand is instructing negotiators to exert all efforts to finish the RCEP talks, Auramon said, adding that the negotiating committee will try its best to conclude the technical negotiations while in Da Nang.

Secretary-General of ASEAN Dato Lim Jock Hoi earlier said that concluding the RCEP negotiations this year will provide the much-needed stability and certainty to benefit regional supply chains as well as the global markets for trade and investment. Dato Lim added that failure to do so will undermine the region’s trade and investment potential, putting market integration at risk.

Once launched, RCEP would create the world’s largest free trade area of over 3.5 billion people and account for about 30% of global trade.