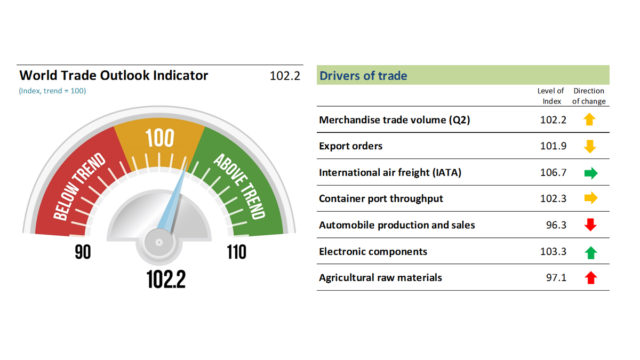 The WTO’s latest World Trade Outlook Indicator (WTOI) suggests that global merchandise trade growth will likely moderate in the fourth quarter of 2017. The reading of 102.2 signals continued trade expansion in volume terms, although the pace of growth should be slower than earlier in the year, when trade recorded strong increases.

The latest reading of the WTOI is slightly lower than that issued in August – a value of 102.6 – which pointed to a continuing recovery of trade in the second and third quarters. This was confirmed by actual trade developments, as trade growth remained strong in the second quarter. In the third quarter, a comparable index of world merchandise trade volumes is in line with the indicator, signalling stable trade growth for the period.

The WTOI is designed to provide “real time” information on the trajectory of world trade relative to recent trends. Combining several trade-related indices into a single composite indicator, the WTOI measures short-run performance against medium-term trends.

The export orders component of the WTOI remains above trend but has turned downward recently, suggesting that trade growth will moderate but remain fairly strong in the coming months. Indices for international air freight and container port throughput are also above trend but have lost upward momentum, pointing to decelerating trade growth. Automobile production and sales are below trend but show signs of having bottomed out, which could indicate strengthening consumer confidence.  Indices for electronic components and agricultural raw materials are both rising, although the level of agriculture raw materials trade remains below its medium-run trend.

These results are broadly consistent with the upgraded forecast for world merchandise trade growth that the WTO issued on 21 September 2017, which predicted 2017 trade expansion at 3.6% following stronger than expected trade growth in the first half of the year.

The WTOI is not intended as a short-term forecast, although it does provide an indication of trade growth in the near future. Its main contribution is to identify turning points and gauge momentum in global trade growth. As such, it complements trade statistics and forecasts from the WTO and other organizations. Readings of 100 indicate growth in line with medium-term trends; readings greater than 100 suggest above trend growth, while those below 100 indicate the reverse. The direction of change reflects momentum compared with the previous month.

Further details on the methodology are contained in the technical note here. – WTO