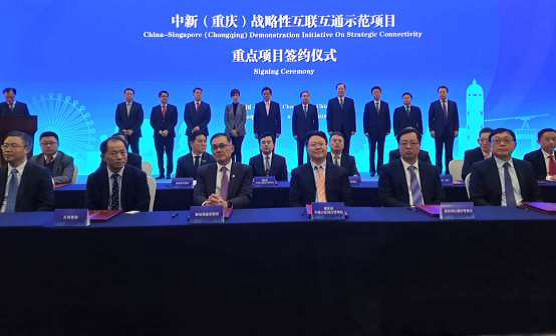 A China-Singapore land-sea trade corridor that has linked 155 ports in 71 countries and regions worldwide will concentrate this year on last-mile connectivity through seamlessly connected hardware and software network systems.

With Chongqing in China as the transportation hub, the trade corridor uses ports in China’s Guangxi’s Beibu Gulf to reach ports in Singapore and other ASEAN countries and links China-Europe freight trains launched from many western Chinese cities before heading for Central Asia, South Asia, and Europe.

Taking advantage of various transport options including railways, highways, and water and air routes, the land-sea corridor enables transportation to more regions across the world.

Singapore’s Minister for Trade and Industry Chan Chun Sing said at the January 8, 2019 dialogue on building the trade corridor that the focus of the CCI-ILSTC this year is to “deliver concrete results and push the boundaries for the next lap of integration.”

He said initiatives will not just be about connecting the physical hardware, but also the data network.

“This year, beyond the top-level design, we will now intensify our efforts on delivering the critical last mile connections. In terms of hardware, we must step up our efforts to connect the road, rail and sea transport, to make the network truly seamless.”

In terms of software, they will push to “intensify our efforts to promote the exchange of data seamlessly, not just between the customs authorities but also between our companies.”

In line with this, nine memoranda of understanding (MOU) were signed January 8 by different organizations for CCI collaborations in sectors such as financial services, transport and logistics, and ICT.

Han said that by the end of 2018, freight trains had made 805 trips via the corridor since a faster rail-sea transit service was launched in September 2017.

Earlier, longer and more costly logistics to the sea in China’s east was one of the bottlenecks that hindered the development of China’s western regions.

Photo courtesy of Singapore’s Ministry of Trade and Industry